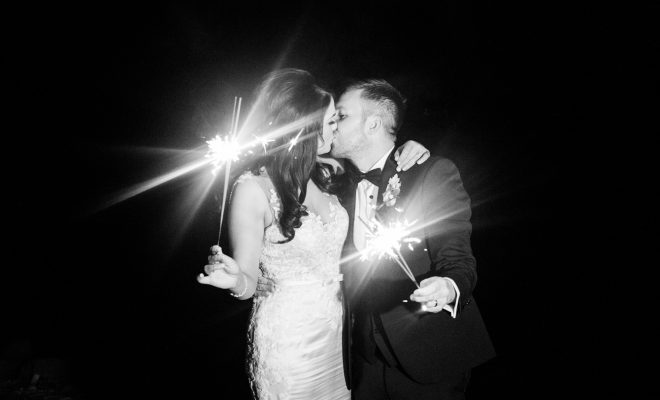 A wedding decorated with glowing lanterns, cherry blossom trees, and beautiful flowers, a dress of silk and swirling floral designs, and sparkling elements throughout gave Grainne Kelly the perfect day.

Even the weather was gorgeous, as the Fintona woman wed Gareth Roulston on October 5, 2018 during a civil ceremony at Harvey’s Point, Donegal, celebrated by Siobhan Duffy Brown.

Their wedding reception, too, was held in Harvey’s Point, set in the mystical, magical shadow of the Blue Stack Mountains on the shores of Lough Eske. It was a location the pair fell in love with after visiting it one very sunny Sunday two weeks after their engagement.

Grainne, a chartered accountant, first met Gareth, a painter and decorator who works at his family business, in Una Vita on Boxing Night in 2011. “And that was it, we’ve been together ever since,” Grainne smiled.

“We went on our first date on December 30 of that year to Grant’s, and then met again on New Year’s Eve. “Both of us are just up for the fun at all times, so I think that’s what brought us together.” 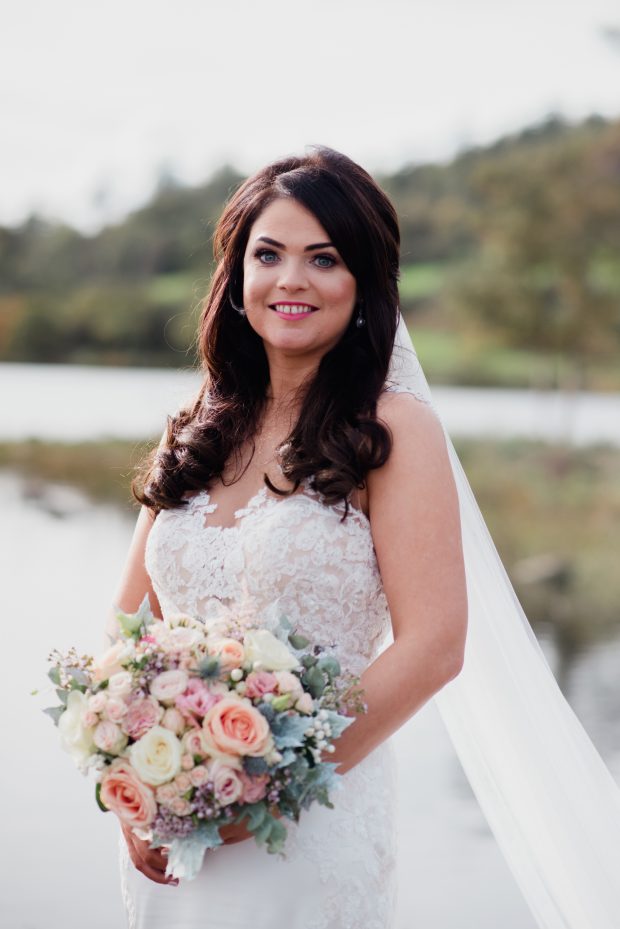 With marriage on their minds, in the Easter of 2017, the happy couple visited Lunn’s in Belfast simply to look at their diverse selection of engagement rings. “But I described exactly what I wanted and they brought it out, so we bought it there and then,” Grainne said. “My engagement ring is a lovely platinum, square diamond ring with a matching wedding ring.”

Grainne and Gareth visited Westport in July 2017 as part of a romantic weekend together and that’s when the Castlederg man proposed. “We were both very nervous but excited on the way home to announce it to our families,” Grainne recalled. “We booked Harvey’s Point about two weeks later as we went to see it on a very sunny Sunday, and after talking it over with my parents, Sean and Irene, we both thought it was perfect.”

Then the pair got stuck into wedding planning, and Grainne said she had no idea that there was so much work involved. “The colour scheme I wanted was pastel colours with a little bit of sparkle which the bridesmaid wore,” Grainne explained. “As we were having a civil ceremony, we both wanted to make the room as pretty as possible. So we added beautiful Catherine chairs, cherry blossom trees, flowers, lanterns and carpet which were all bought from Simply Divine Weddings recommended by the hotel. “It was perfect on the day.” 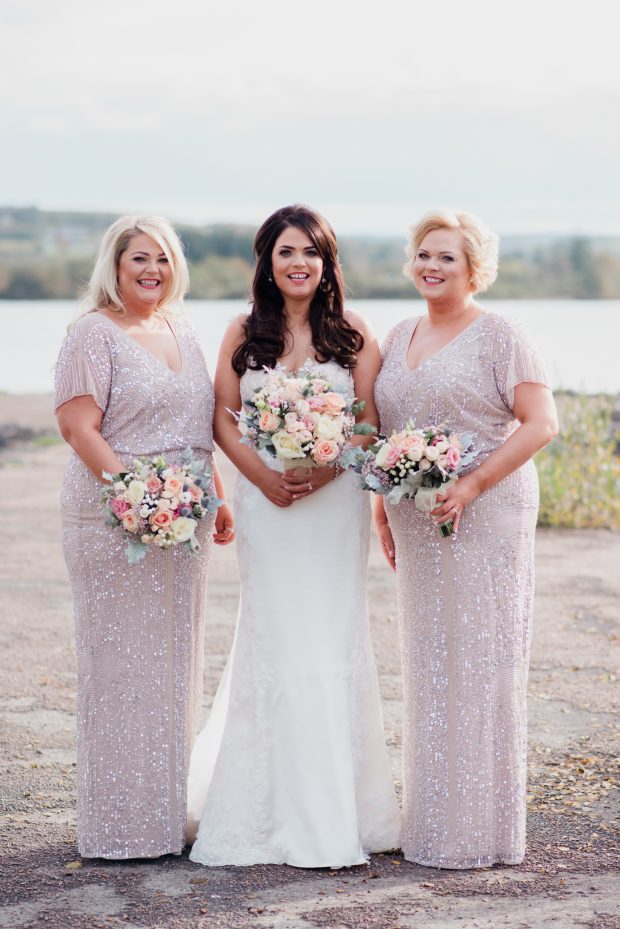 The ladies are looking lovely, as bride Grainne Roulston (née Kelly) smiles for a picture alongside her sisters, Maeve McAnulla and Sinead Kelly, who were also her bridesmaids.

Grainne went to three different bridal gown shops in search of the perfect gown, and eventually found it in Serendipity in Fivemiletown. It featured a fitted design of silk and embellished with floral patterns, with a feminine low back and a long train. And of course, Grainne also purchased the matching veil to complete the ensemble. “I just loved it, and so did my mum, Irene and sisters, Maeve and Sinead,” Grainne described. “But because I love accessories, I had to add a little piece of my own to the back of the dress, which I got made by Sarah Deering.”

Grainne recalls that both she and Gareth were stressed during the leadup to the wedding, but thankfully on the day they felt so relaxed and all the nerves subsided. “The weather was perfect too,” Grainne recounts. “It was a sunny October day, even though the weather before and after was not so nice.”

Both bridal parties were whisked away to the hotel at Harvey’s Point in two sleek limousines for the civil ceremony, closely followed by Grainne’s brother and his wife, and then her sister’s husband after that. They were not only greeted with music but also celebratory champagne to create a welcoming atmosphere which was buzzing with excitement. 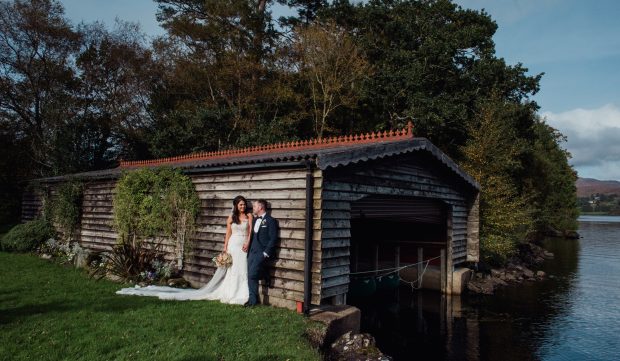 Grainne, daughter of Sean and Irene Kelly, and Gareth, son of Dessie and Yvonne Roulston, enjoy a peaceful moment on their wedding day which they celebrated at Harvey’s Point, Donegal.

Describing the ceremony as ‘just perfect’, Grainne said the celebrant, Siobhan Duffy Brown made the pair feel so relaxed – and thankfully there were no tears. “Everyone said the ceremony was just lovely,” Grainne said. “We had chosen the music for the ceremony, and Daire and Louise sang throughout so beautifully. “Then we had a fun upbeat song for walking out as a happy married couple.”

Wedding band The Drunken Lullabies entertained the guests and after the meal, Grainne’s parents had booked a very special and unexpected surprise for the newlyweds: a duo of singing chefs. “It was so much fun,” Grainne smiled. “They came in and sang opera music and encouraged all our guests to get involved. It helped get us in the mood for what followed.”

A fantastic set by Justin McGurk, ensured that the 180 guests partied the night away, and the new Mr and Mrs Roulston were more than happy to stay up late dancing so that they could say goodbye to each guest as they left.

“Our wedding went better than we could ever have expected,” the 34- year-old concluded. “The bridal party had a member of staff each following them at all times, catering for their every need; the hotel’s service to everyone was just unbelievable. “Everything was just perfect.” 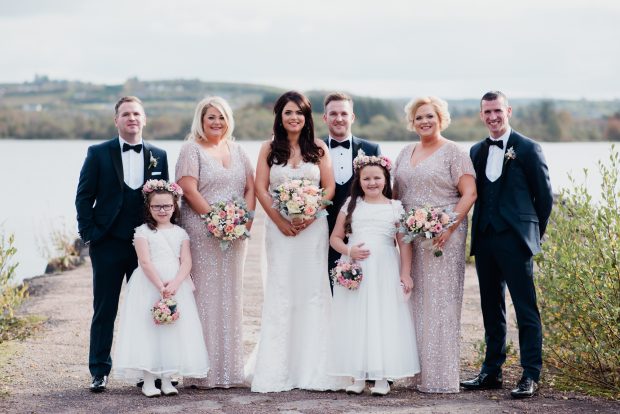