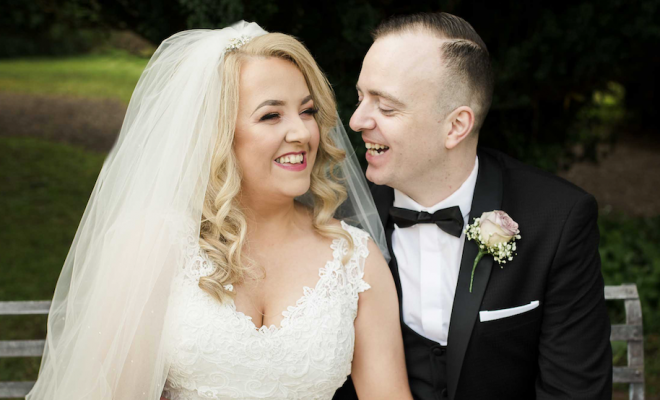 With roses, lace and sparkles in abundance, themes of love and romance cascaded throughout Maria and Paul Campbell’s perfect spring wedding day. Indeed the pair, who were wed by Father McElhatton at St Mary’s Church, Killyclogher on April 6, 2019, have described the occasion as ‘the best day of their lives’.

The new Mr and Mrs Campbell’s wedding reception took place at the Manor House Country Hotel, Killadeas, Enniskillen, located in the midst of the Fermanagh Lakelands. For Maria (née Devine), it was a place ‘beautiful both inside and out’, and its stunning views of Lower Lough Erne also captured her heart. The venue’s beautiful food, and friendly staff further helped to make the newlyweds’ day special. 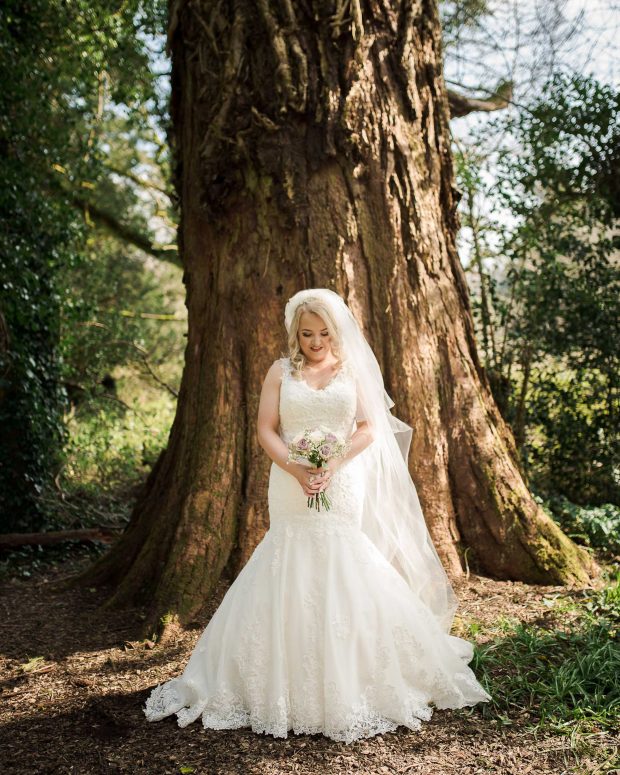 Recounting how the pair met, the Omagh woman explained that she moved in next door to Paul in the summertime of 2004. They quickly became friends, and then it was on December 11, 2004 that their relationship began. “We got on really well,” Maria, who is a nursery assistant, said. “I really liked how easy-going he was, and his personality was a lot like mine. “I also loved his smile and his eyes. “We had each other’s phone numbers from being friends,” she added. “So he texted me one night, and we arranged to go out for a night out. I remember that he was such a gentleman, and was always asking was I okay. Our relationship all started from there.”

Together for 12 years, it was on December 10, 2016 that Paul, who is a sales assistant, proposed in a very ‘sweet’ way while dining at Grant’s Restaurant in Omagh. “His dessert came out, but mine was delayed a bit,” Maria said. “The waiter said that mine, a chocolate brownie, was ‘coming now’ and ‘sorry for the wait’. “When it arrived, I was shocked to see ‘will you marry me?’ written with strawberry sauce at the top of my plate. “Everyone at the restaurant was watching and cheered as I said ‘yes!’”

To make the moment even more special, the Omagh man gave Maria an engagement ring which he carefully picked out himself. “I felt so emotional when the proposal happened,” Maria continued. “I tried to hold my tears back, but cried a little. He was always such a romantic. “My engagement ring was beautiful, and I loved the style and everything about it. He did an amazing job picking it himself.” 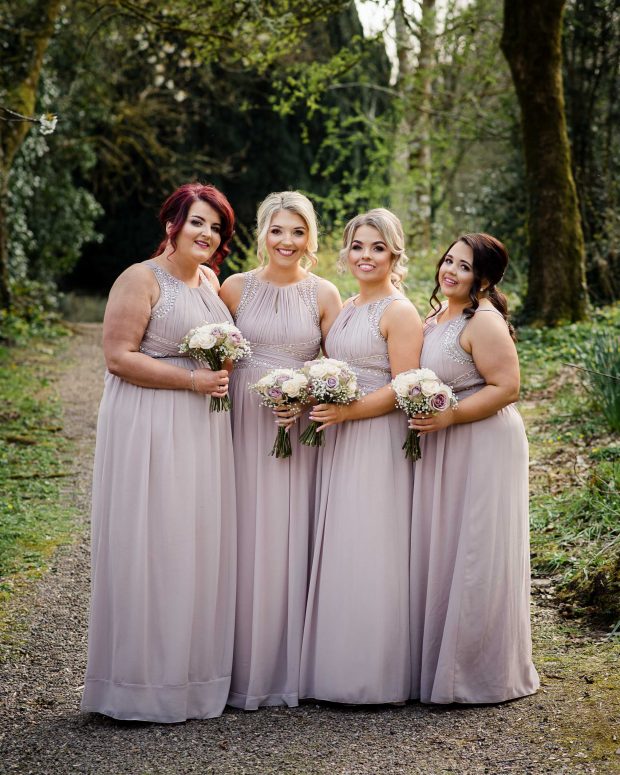 With their minds set on a wedding day that was both ‘modern, yet traditional’, the couple said they couldn’t wait to begin their planning. “We wanted our wedding day to be meaningful to us both,” Maria said. “We decided to keep the colours neutral and romantic, and we selected roses, carnations and gip as they were flowers that had a romantic feel. “We chose the Manor House in Enniskillen as our wedding venue as it was beautiful inside, the grounds were stunning and the views were breathtaking.”

It was the first wedding gown in dress shop number three – Tomorrows Bridal in Derry – that took Maria’s breath away. “After going to a few shops, I was still undecided as what dress to go for,” Maria reflected. “But then I went to the third shop, and I knew right away that the first dress I tried on was the one I had been dreaming of. It was perfect.” The gown in question boasted an exquisitely romantic feel, with a ‘fit and flare’ design, decorated with gorgeous lace and a beautifully detailed train. “To complete the look, Maria paired the feminine number with a long and sparkling veil.

On the morning of Maria’s wedding, the blushing bride-to-be said she felt a mixture of excitement, nerves, and relief – the latter emotion because the weather had been terrible in the lead-up to her big day. “The previous week before our wedding it was pouring with rain, with the occasional flurry of snow,” Maria remembered. “But when our day arrived, the sun shone for us. How lucky we were.” 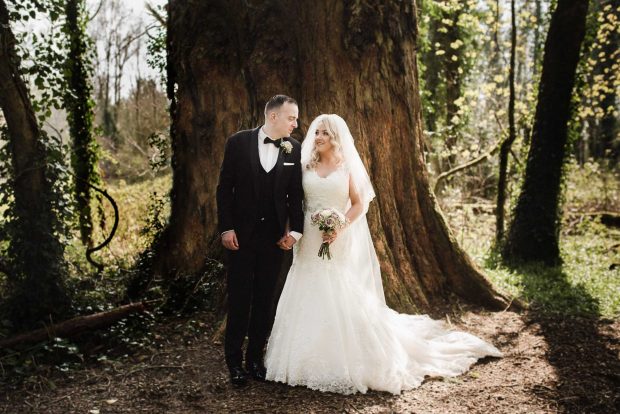 Maria arrived at the chapel in an Imperial Ghost car, following the bridesmaids who arrived in a gorgeous limousine. After making her way onto the red carpet at the chapel, Maria walked down the aisle to ‘You By My Side’ (Ave Maria), sung by the talented Ciara Fox. “Our service was just beautiful,” Maria said. “The music made it magical.

“We had the perfect wedding day from start to finish, and celebrating with family and friends, making it more special. “I was also very surprised as my husband had a few surprises throughout the day that I wasn’t aware of,” the 31-year-old continued. “My first surprise was a trip to Lanzarote for our minimoon, followed by Singers Secreto at the reception and then the evening was topped off with fireworks.

“Bitz N Pieces supplied the entertainment throughout the day and they were fabulous,” she added. “They welcomed guests to the venue, played the music for the dancing in the evening, and they later provided the DJ. “We partied on even after the music stopped, as we didn’t want our day to end.

“Paul and I would like to thank everyone that attended our wedding, and our family and friends for making it so special. It was the best day of our lives.” 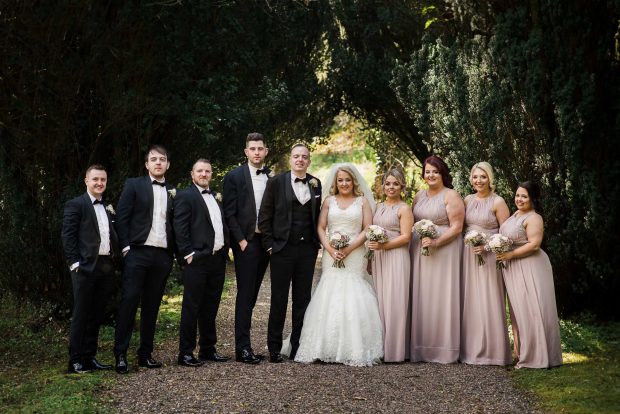 Related ItemscakeCeremonyengagementflowershairproposalreceptionringvenueweddingWedding dress
← Previous Story 8 Fabulous Ways to Keep Your Guests Entertained at Your Wedding
Next Story → ‘I’d Like to Say a Few Words’: 10 Brilliant Tips for Brides Giving a Speech