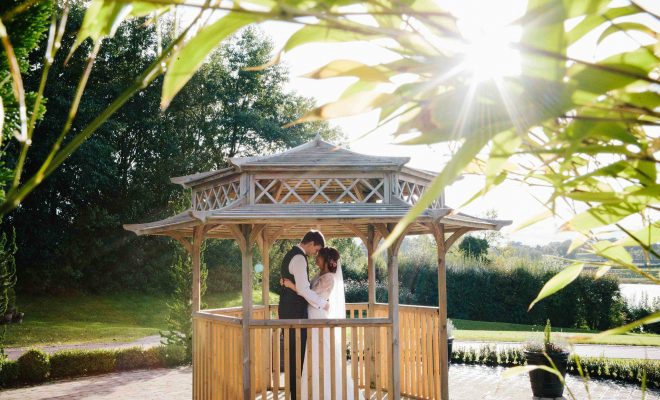 A surprise proposal on the breathtaking cliffs of Tenerife just as the autumn sun began to set, transformed into a beautiful country wedding for Sarah-Louise Campbell and Stephen Simpson.

The pair were married in a moving ceremony performed by Rev. Peter Dickinson and Rev. Roger McElnea at Gortin Presbyterian Church on September 22, 2017. Their wedding reception took place in the Killyhevlin Hotel in Enniskillen – a venue that the newlyweds described as ‘amazing’ due to the personable and accommodating staff and its location which boasted a backdrop of the glittering Lough Erne. They were also very fond of the delicious food! 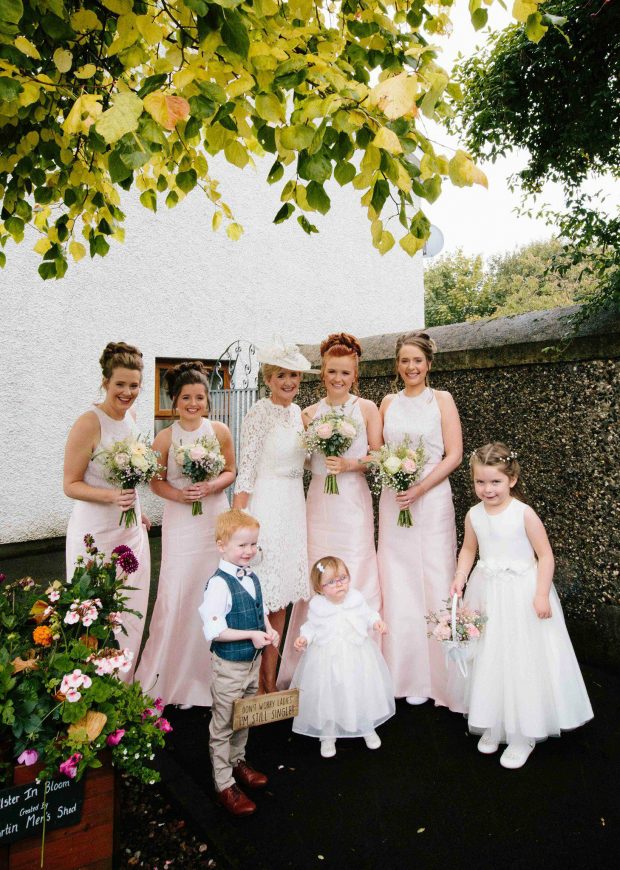 Sarah-Louise, who is a solicitor from Gortin, first met Stephen, a chemical engineer from south Belfast during a Presbyterian youth weekend called ‘Making A Difference’ or MAD for short. “We were both on the volunteer crew,” Sarah-Louise explained. “In his wedding speech, Stephen claimed that he was ‘drawn in by my infectious smile across the room’ during that weekend.”

When asked what she liked about her partner, Sarah-Louise revealed that they were quizzed about this very question during their hen and stag parties, as part of a Mr & Mrs question challenge before their wedding. “Stephen answered with ‘her smile’ immediately, while I hemmed and hawed as I found it difficult to choose just one thing!” Sarah-Louise said. “In the end I gave up and just blurted out ‘his eye lashes’! They are so long – something I had noticed and envied from very early on.”

It was during a beautiful holiday away to Tenerife in September 2016 that Stephen asked Sarah-Louise for her hand in marriage while enjoying a romantic walk. This came as ‘a complete surprise’ to Sarah-Louise, who was convinced beforehand that she would know when he was planning to propose.

“We were in Tenerife when Stephen cooked us both dinner which we had on the balcony before going for a walk to explore,” Sarah-Louise said. “Little did I know he was timing the sunset. Foolishly I didn’t think through my footwear choice and was oblivious to how far he intended to go to get the ‘right spot’ to propose, which he had scouted out on Google Maps beforehand.”

She added, “When we got to the beach, which was a good distance away, I told him that my flip flops were hurting my feet and I couldn’t get flip flop injuries on the first day as it was the only footwear I had packed. “I told him that we really needed to turn back immediately.”

Despite trusting Stephen to walk her the shortest route back, soon Sarah-Louise found herself clambering over rocks, and heading in the direction of a sea cliff instead. “I stopped and said, ‘Wait a minute Stephen, I have sore feet and this isn’t the way back… What are you playing at?’,” she recalled.

“He managed to convince me to continue, and I genuinely didn’t suspect a thing. Next thing I know, he is down on one knee popping the question – which he barely had a chance to finish before I gasped and started blabbering in disbelief. I was so taken aback that I forgot all about my flip flops hurting me. That was one way to fix the problem.” 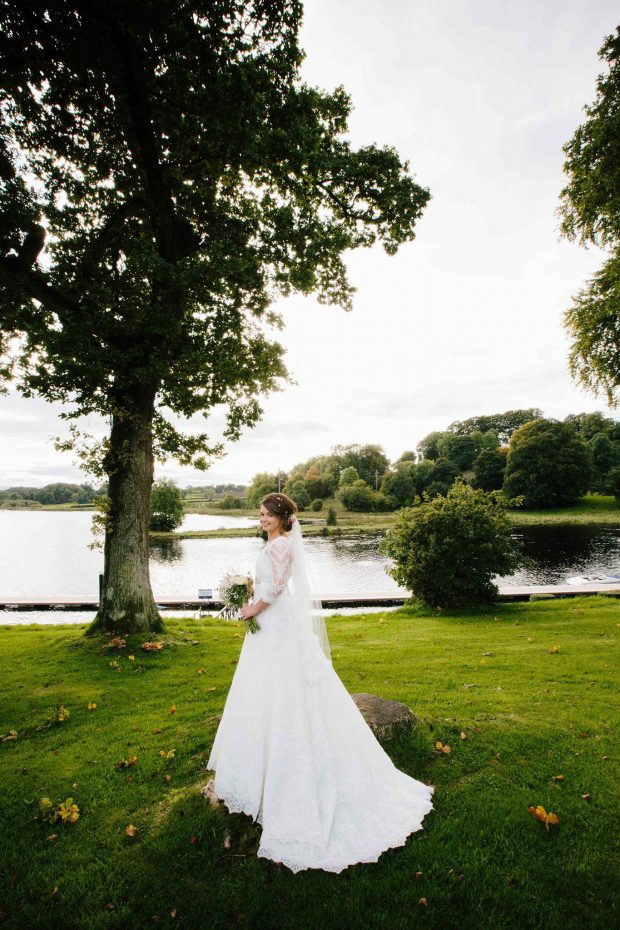 The new Mrs Simpson, who is now living in Annahilt, Hillsborough with Stephen, fell in love with and purchased the very first wedding dress that she tried on. “After trying on that dress, I was sure of it and contemplated getting it that first day,” she said. “But my sister and my mum, Valerie, stepped in and told me that I most certainly could not settle with the very first dress I tried.

“They told me that it was common practice to explore the options first, so the wild goose chase began and my mum began making appointments somewhere new each Saturday. During my last appointment, I tried on a dress I really liked,” Sarah- Louise continued. “I concluded that it was between this dress and the very first dress.”

“We made another appointment with Belle Mariee in Omagh to see the first dress again – but it turned out that both dresses I liked were the same dress! I had just tried so many on that we didn’t actually recognise they were both the same dress. That confirmed the decision.” 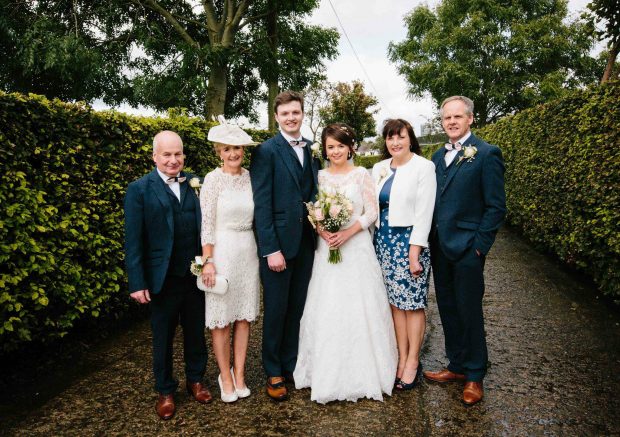 Newlyweds Sarah-Louise and Stephen Simpson, alongside their parents, William and Valerie Campbell and David and Christine Simpson.

Sarah-Louise recalls feeling ‘surprisingly relaxed’ on her wedding day – and thankfully she managed to stay calm when disaster struck on the day and one of her flower girl’s dresses went missing. “My flower girl, Sophia arrived at our house about an hour before we had to leave, ready to put on her dress,” she said. “She was super excited, but when my mum asked me to get the dress I laughed and thought she had forgotten she had it. “She went searching and searching but to no avail. It was all stations go. We were due to walk down the aisle in less than an hour and had a flower girl without a dress!”

After much thought, they worked out that the dress was hanging in Sarah-Louise’s house in Annahilt in Hillsborough – which would take over an hour to drive to. “We didn’t have many, if any, options at this stage,” Sarah-Louise said. “Running out of ideas, mum rang Belle Marie Bridal where I had purchased my dress as they had been so helpful throughout. “We explained the situation and they were more than happy to assist. We asked them to hoke out anything that might fit Sophia – and one by one we went through the dresses.

“They were all white, not ivory to match myself and the other flower girl – although matching was becoming less of a priority at this stage. There was one ivory dress, but it was a size smaller than what Sophia normally would wear. She tried it on anyway in hope, and it fitted perfectly which was a relief!”

With the disaster mercifully averted, the Gortin bride and her father, William (Billy) made their way to the church using the same mode of transport as her mum used when she got married – a horse and carriage.

As both Sarah-Louise and Stephen are Christians, the church service was an extremely important part of their day. “We were super excited to become one in the presence of our God,” Sarah-Louise said. “We had a mix of musical friends play throughout the service, and we were extremely pleased with how they all complimented one another despite only having met once for the practice. “We also appreciated the personal touch of having a family friend conduct the ceremony.”

Shortly after the service, the new Mr and Mrs Simpson hosted the cutting and eating of the cake, along with light afternoon tea before travelling to the Killyhevlin Hotel and dancing the night away. “Our wedding day was an absolute blast and we wouldn’t change a thing,” the 25-year-old concluded. 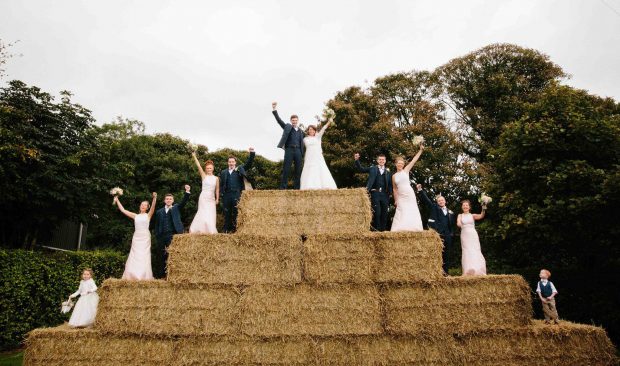 Related ItemsBelle Marie Bridal BoutiqueKillyhevline Lakeside Hotel & Spa
← Previous Story 8 Things To Consider When Choosing Your Wedding Location
Next Story → To Speech Or Not To Speech? 6 Tips To Help You Decide