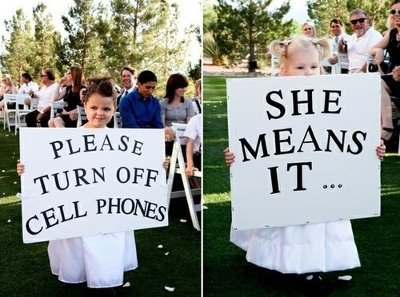 It’s becoming increasingly evident that our lives are being shared on a daily basis on social media. It is now not unusual to wake up after a night out and feel like burying your iPad in the back garden. Sometimes, I’ve felt like burying my entire computer!

So what then about the best day of your life? Not so long ago, when a couple got married, the only way to see evidence of the wedding, if you hadn’t been invited to the day itself, was to call over to the couple’s house and be bored to death for ten hours looking at the photos. Not anymore!

These days, a person can quite easily view the entire wedding album of their workmate’s cousin’s sister’s niece at the click of a button and my oh my don’t people like to judge! Everything from the venue to the cake and yes, even the bride’s dress is up for show and comment. Add that to the very long list of things a bride might be already worrying about on her big day and it isn’t difficult to see why a couple might opt for an “unplugged wedding”.

As for my Big Fat Spanish Wedding, well I must admit, the thought of my big head being splashed all over social media the day of my wedding, doesn’t exactly fill me with delighted giggles! Like all couples, Mr Brady and I have hired a respected photographer to take our snaps and we are paying him quite the handsome fee. We might hope that in exchange for our pennies, our photos will be flattering, artistic and not at all reminiscent of how we look in real life! Such is the talent and skill of our trusted Bob!

Photos taken on iPhones don’t quite have the same stylised factor. Double chins, under eye circles and large behinds all come out to play. By the time we get our ‘paid for’ photos back from the photographer, our “candid shots” have already done the rounds on Facebook and been liked, shared and even commented on – sometimes by people you literally wouldn’t say hello to on the street. What is a bride to do? Run around before the ceremony screaming at people to surrender their phones? It’s worth a try. Some couples opt for the more tactful route, adding a quick note to the invites asking, diplomatically of course, if phones could be kept in pockets until later in the day. 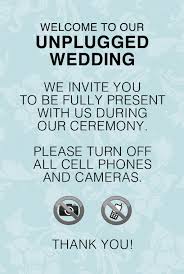 It does sound a bit wannnabe celebrity, doesn’t it? That’s exactly what put me off adding such a request to our invites. While I remain open to offers from “Hello” and “OK” magazine which I’m sure will come through any day now, I am currently under no such obligation to guard my wedding photos. Who am I to tell my guests who have taken holidays, spent money and travelled to be with us, that they are not allowed to share photos on their own social media accounts? Kim K? I don’t think so. 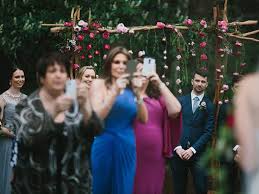 I recently spoke to someone who told me they’d heard of an instance wherein a bridesmaid took a snap of the bride to be fully gowned and veiled in the morning before she had left the house. Said bridesmaid then thought nothing of uploading the pic to Facebook and voila – the groom to be who happened to be scrolling through his newsfeed managed to catch a full eyeful of his lovely bride – before either of them had even left the house! Sackable bridesmaid offence number 124! While this story may be put down to a common sense failure on the part of the bridesmaid, it’s easy to see how such things can happen, taking photographs and uploading them to social media is now such a simple process, as natural to us all as playing snake used to be.

I think what it comes down to is the scope of your wedding. If you’re having a more lavish affair, your bulging cheeks as they try to chew a mouthful of wedding cake could easily end up on hundreds of social media accounts. Depending on how much this would bother you, it might be worth adding that request to the invites or having the celebrant make the request at the start of the ceremony. If like me, you’re having a much smaller do, the possible social media onslaught is likely to be far smaller in comparison.  Update your Facebook settings so that all photos in which you are tagged have to be approved by you or your groom and hope that your guests apply a modicum of sense after that – photos of the bride looking radiant and glowing as she floats up the aisle – good. Photos of the bride putting her foot through her own dress and falling head first into the Mediterranean Ocean – unplug!!