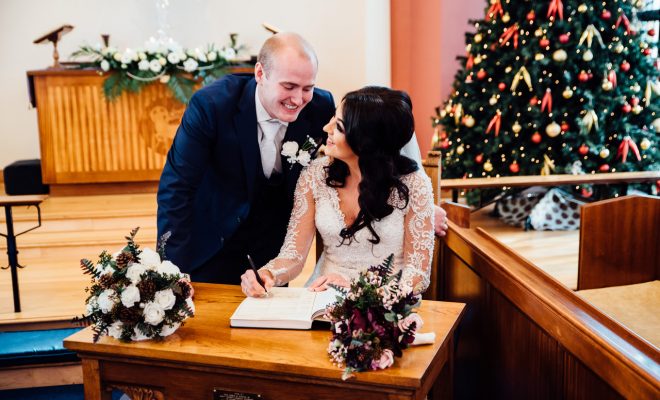 Simply a perfect wedding day for Trudy and Jonathan

A beautiful proposal while sailing on the sunkissed shores of Lough Erne transformed into a truly magical winter wedding filled with smiles and love for Trudy Crozier and Jonathan Ferguson.

The pair were wed on December 15, 2017 at Holy Trinity Church in Dromore in a traditional and personal ceremony performed by Reverend Andrew Quill.

Their wedding reception took place at Lusty Beg Island – a place the couple had ‘always loved’ due to its special atmosphere, particularly in the wintertime when the lighting is beautiful and the stoves are glowing.  As the couple became engaged on the waters near the island, they also knew straight away that it was the perfect venue for them.

Trudy, who is a customer adviser at Power NI, first met Jonathan, a plumber from Omagh, through mutual friends in December 2010, just before Christmas. After the pair enjoyed a couple of dates together, Jonathan asked the Dromore girl to be his girlfriend on February 13, 2011. 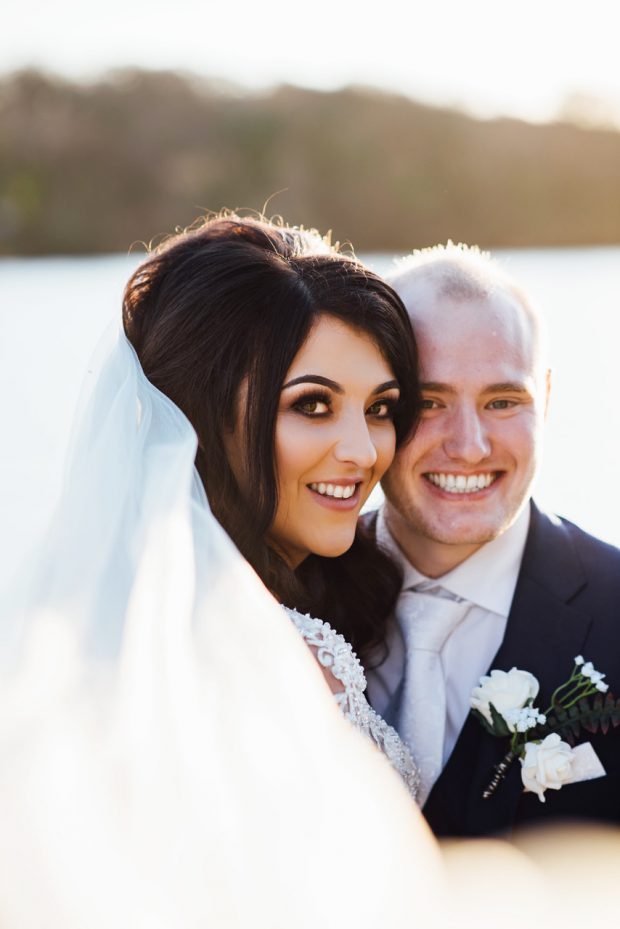 The new Mr and Mrs Ferguson celebrated their wedding day at the scenic Lusty Beg Island.

“He’s genuinely the kindest and most thoughtful person I have ever met,” Trudy described. “He has a heart of gold. He makes me laugh, and makes me feel so special every day.”

It was on June 27, 2015 that Jonathan asked Trudy for her hand in marriage while on a special boat trip together. Jonathan hired a boat from Castle Archdale, and the pair headed out on the shimmering Lough Erne for the day.

When nearing Lusty Beg island, the summery blue waters became much calmer so Jonathan convinced Trudy to drive the boat (as she had been too nervous to do so before!) With Trudy at the helm, Jonathan headed to the back of the boat and after a few moments he got down on one knee, clasping a box which contained a ring that Trudy loved ‘from the moment she saw it’.

“He said some lovely words, and asked me would I be his wife,” Trudy reflected. “It was a lovely surprise.” Jonathan chose Trudy’s ring by himself during a trip to Lunn’s in Belfast while she was on a holiday to Iceland with her friend. Knowing how much Trudy admired her mum’s yellow gold rings, he picked out a sparkling 18 carat yellow gold band just for her. The engagement ring also featured a shimmering circular diamond in the centre, surrounded by a ring of smaller glittering diamonds.

“After the surprise of seeing him down on one knee and saying yes, I began to absorb that we were now engaged and started crying with happiness,” Trudy said. “He had it planned to perfection, and I still get goosebumps when I think about it. “But with all the excitement, we forgot to steer the boat… and almost crashed! We still laugh about that till this day.” 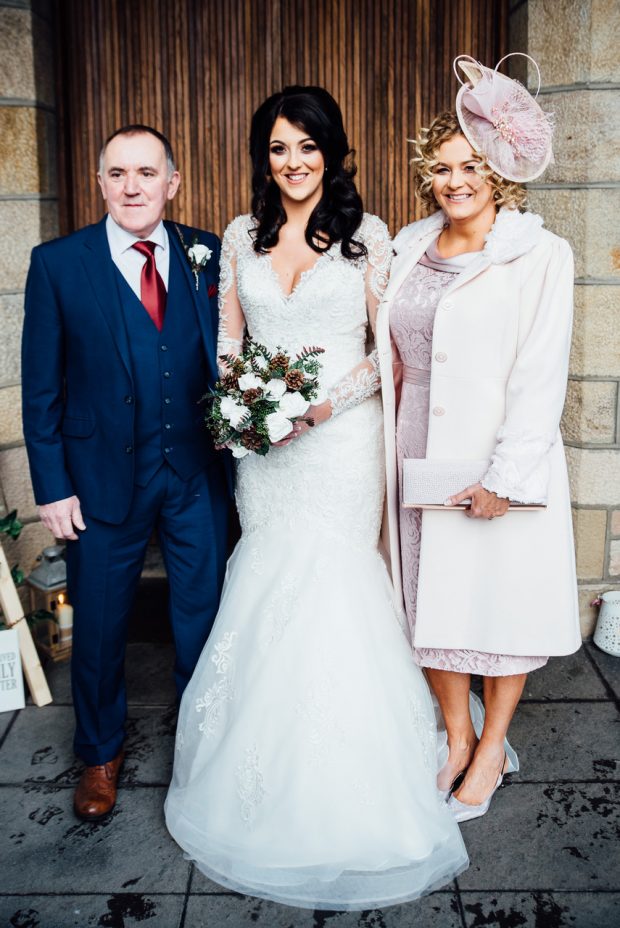 Trudy is all smiles with her parents, Ken and Karen on her big day.

After booking their wedding venue in July 2015, the pair then began saving up for their big day and planning all the smaller details. This process was made all the more exciting though, as the couple also began planning the building of their new house.

“We both absolutely love Christmas, so we chose December 15, 2017 as our wedding date,” Trudy explained. “I didn’t want to go overboard and make it too Christmassey, but we always knew we wanted it to look festive and wintery.”

Visiting ‘Creative Ideas’ in Cookstown on her second weekend of bridal dress shopping, Trudy found a gown which she simply ‘didn’t want to take off’. Made from a mix of tulle, lace and organza fabrics, the ivory Ronald Joyce number featured a fitted body, a mermaid shape and delicate feminine sleeves. It also boasted beautiful embellishment all over with pearl and diamanté detail. “I knew straight away it was my dress,” Trudy said. “My mum and sisters were with me, and they still laugh at how giggly and excited I was.”

When the morning of her big day finally arrived, the winter sun was shining and Trudy said she simply couldn’t wait for the ceremony. But little did she know that there was one more prize in store for her before she reached the church. 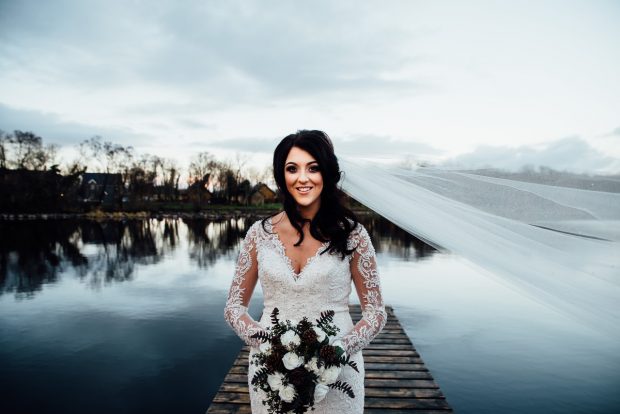 “Jonathan got me a beautiful bunch of red roses delivered in the morning, and had left a little box for me containing the most gorgeous bangle engraved with ‘all my love 15.12.17’,” Trudy smiled. “I had my make-up all done, but it was so hard to hold back my tears.

“After all our planning, we just couldn’t wait to be husband and wife. I just felt so complete when I saw Jonathan standing at the top of the aisle with a big smile on his face.”

Describing the service as ‘beautiful and so relaxed’, Trudy said that both she and Jonathan just couldn’t stop smiling. “We were bursting with pride at having all our family and friends present,” Trudy said. “It was just pure happiness, as we’d been waiting for this day to come for so long.

The 24-year-old concluded, “Our wedding was simply perfect. It was a lovely relaxed day with lots of fun and love, and for us it was so special to have our friends and family sharing it with us. “We wouldn’t change a thing, and it was honestly the best day of both of our lives.” 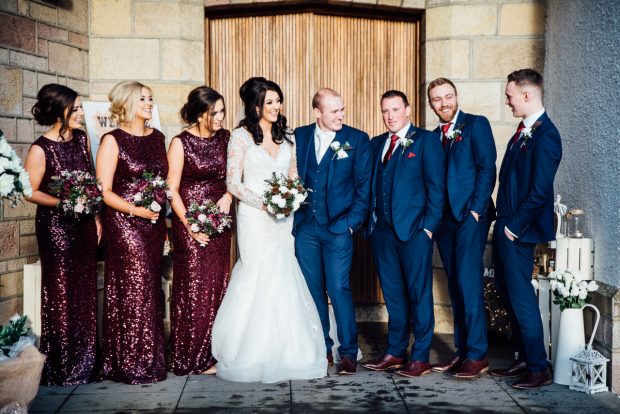