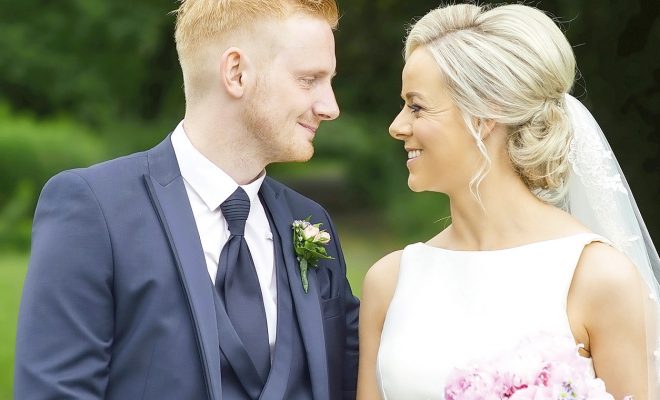 The day after Gary McConnell met Siobhan Galbraith for the very first time, he told her he would marry her. Ten years later and those words became reality.

The couple, who are both from Omagh, were wed by Monsignor Donnelly at the Sacred Heart Church, Omagh on July 22, 2016.

First meeting on a night out in their beloved home town in the early hours of Christmas Eve 2006, Siobhan said that it was simply love at first sight.

“He told me on the day after I met him that he would marry me one day – albeit with a few drinks in him,” she laughed. “Turns out that he wasn’t lying.”

It was on January 2, 2014, when the pair were together for seven years, that Gary (33) surprised Siobhan (31) with a romantic proposal in their living room. 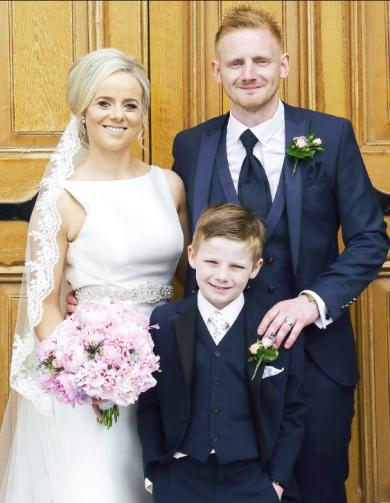 The new Mr and Mrs McConnell, alongside their son Shay.

Getting down on one knee, he presented the classroom assistant with a white gold ring, featuring a raised cluster of diamonds and a diamond encrusted band. And their son Shay was there to witness the special moment too.

“It was a complete surprise, but I was just delighted,” she smiled. “I didn’t expect it one bit, and even Shay was shocked.” Eager to plan for their traditional style wedding straight away, the pair began to look at different hotels shortly after their engagement. But it was the grand Four Seasons in Monaghan which captured Siobhan’s heart the most.

“I liked the Four Seasons because it had a homely and laid-back atmosphere,” Siobhan explained. “It also wasn’t too much of a journey for our guests which was good. The venue was just right for us.”

For Siobhan, shopping for her glamorous wedding gown was enjoyable but “different to how it is in the movies”. However, after two months of searching for the right one, she felt a sense of relief when she found her dream gown in Romantique Bridal in Magherafelt in October last year.

The fitted Mikado silk gown flaunted a mermaid-style shape, and to add an extra touch of glamour, Siobhan wore it with a sparkling diamond belt.

On the morning of Siobhan’s summer wedding, she described feeling ‘happy and relaxed’ – but there were also a few butterflies in her stomach ahead of her big day.

“I was excited, but I also felt a sense of relief as well as trepidation,” she described. “But the service just flew in, and it was very relaxed. Monsignor Donnelly helped us to feel at ease. “Donna Taggart provided fab music as always,” she added. “Our page boys really enjoyed her performance, and as we signed the register in the sacristy, they entertained the guests by dancing. “The weather also stayed dry – it was not too hot or too cold – which suited me perfectly.”

Being whisked away to the wedding reception in a classy limo alongside her bridal party, the new Mrs McConnell had no idea that Gary, who is a store assistant, and Shay had prepared a special surprise for her after arrival.

“Shay read a poem out for us that he and daddy had written in secret,’ she beamed. “We were so proud. There was not a dry eye in the place.” Then it was soon time for the newlyweds, alongside their 140 guests to enjoy the wedding cake, featuring two white tiers and a lilac tier decorated with a boxed bow and brooch in the centre. “It was topped with a nice ‘Mr and Mrs McConnell’ cake topper,” she described. “It was lovely, plain and simple.”

With wedding band ‘The Rockits’ setting a lively atmosphere, the couple danced the night away – and even joined guests in the resident’s bar long after the music had finished.

“We all had a fab day,” Siobhan concluded. “It just couldn’t have went any better, and needless to say, we would love to do it all over again.” 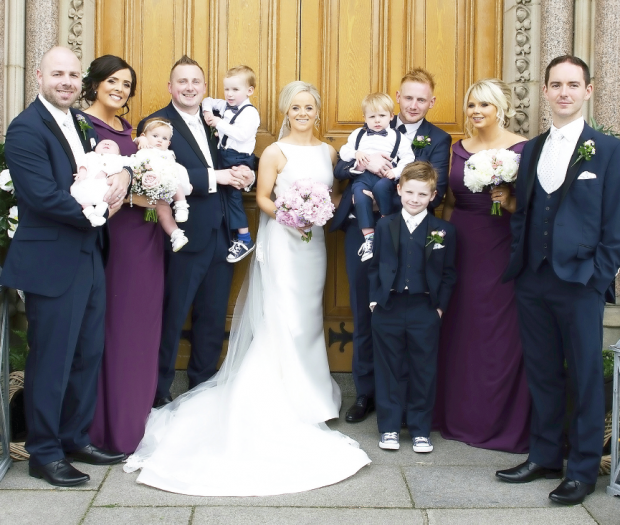