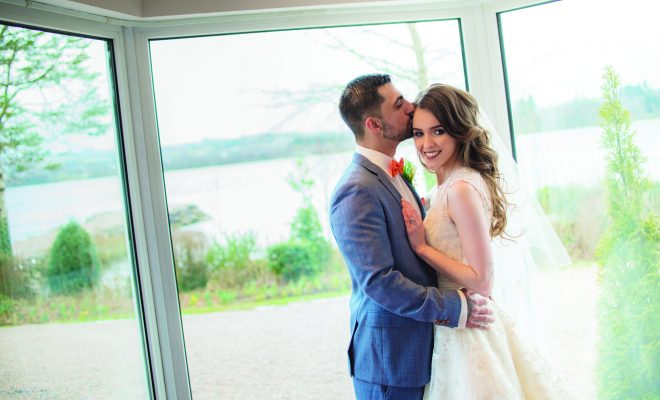 Snow and Hearts Melt As Lisa and Danny Tie The Knot

‘Houston there is no longer a problem’ – this twist on the famous movie quote could easily sum up the perfect union of Lisa McAuley and Danny Houston who celebrated their wedding in style with family and friends in March.

The couple were wed at St Mary’s Church, Strabane on March 2 by Fr Michael Doherty with a fun filled reception at the spectacular Harvey’s Point in Donegal with the beautiful backdrop of the mountains and water adding to the ambience of their celebration. 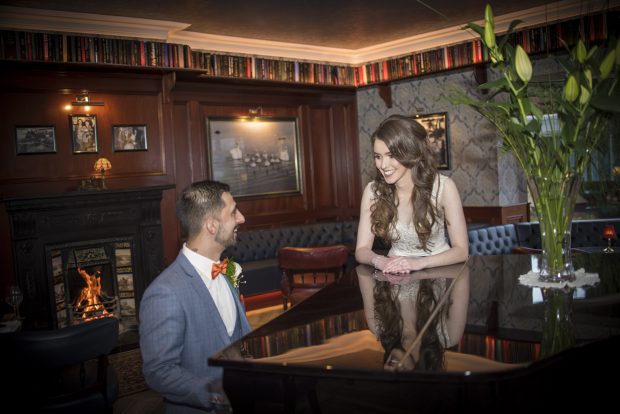 The happy couple enjoy a duet at the piano in Harvey’s Point.

Both from Strabane, Danny and Lisa worked in the same company and had known each other for quite a while before they started dating. “Due to his rap music and seeing him around town, we thought Danny was going to be this nice guy but someone who was very arrogant and in your face, but little did we know,” recalled Lisa.

“He couldn’t be more opposite from arrogant if he tried. He is the most loving and soft-hearted person I have met. What I love about Danny is his selflessness and his calm, relaxed demeanour. As a worrier, it’s good to have a partner who is able to counteract that and help me relax. A lot of people say chivalry is dead in this day and age, but Danny keeps that alive and it may seem minor to others but he is a true gentleman.”

As is often the case, nerves played a part in the proposal on a night away in the Mount Errigal Hotel in 2015 to mark the anniversary of their first date. Retiring to their room, as Danny was ‘too freaked out’ to pop the question in the restaurant, it was then Lisa’s turn for butterflies.

“Danny got down on one knee, and asked the all-important question and little did he expect, I ran away whilst he was hobbling after me on one knee. I needed to grab a seat and sit down, he had to ask me what my answer was, I was in such shock.” Lisa – who of course said yes – was “incredibly delighted to have such a loving gentleman want to spend the rest of his life with me”. And the engagement ring chosen by Danny did not disappoint – a sparkling silver and gold diamante. 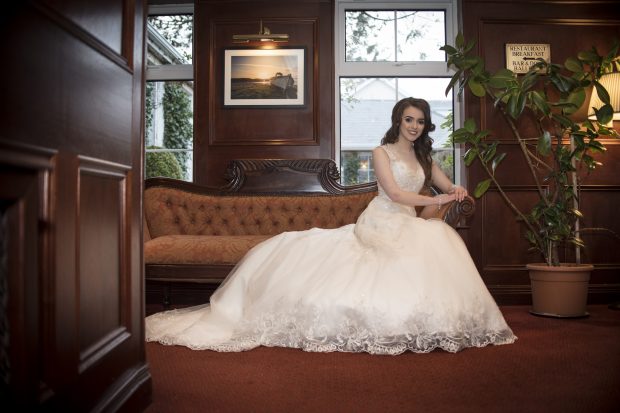 The couple chose the same date March 2 – on which they first met – as the date for their wedding in 2018. Despite having three years, Lisa got straight down to making the wedding plans. “I’m a little obsessive when it comes to organisation, so planning straight away was only the norm for me. I had a goal to have everything sorted and completed six months prior to the wedding, which we did achieve.”

She wanted the wedding to be plain and sleek – without sideshows like candy carts, and photo booths – but with green as the dominant factor in the overall scheme, as it is Lisa’s favourite colour. “The only thing we wanted to keep as a subtle rolling theme for the wedding, was music, as both me and Danny love music. We did some DIY crafts and made hanging hearts for the pew ends at the chapel and a few lanterns at the front of the altar.”

Lisa also managed to find her dream wedding dress without too much hassle, visiting just two shops. “I didn’t start dress shopping until one year after I got engaged and I chose my wedding dress two years before our wedding,” she said. “The second store I went to, was Beautiful Day Cottages in Greysteel, Derry. The service I received here was phenomenal and what I liked most, was they were honest about how certain styles looked on me, which is what you really want to hear when choosing your wedding dress.”

Time for a tipple for Danny and Lisa.

The dress which she chose, was not what she had originally envisaged and her mum provided the telling guidance for the most crucial of the wedding details. “I believe it was my mum who actually lifted the dress I chose and asked me to try it on, in which my response was ‘put that away quick, how embarrassing, it’s hideous’. “Unbeknown to me, that was actually my dress. When I eventually tried it on, I never wanted to take it off, it was just so me. For anyone looking for a wedding dress, I would definitely advise to step out of your comfort zone.”

Harvey’s Point was chosen, as it is a “spectacular venue”. “As soon as we stepped in the door, we just looked at each other and said ‘this is it’,” explained Lisa. “We couldn’t possibly look anywhere else, as we knew nowhere could compare. What we liked about it, was the rich feel as soon as you step in the door. From the chandeliers to the wooden panelling, open turf fires, to the modern twist throughout the hotel.”

And all the preparation paid off for Lisa and Danny, so much so, that it was the bride who had to help relax the bridesmaids. “I was more laid back than anyone in the room that morning. I just wanted to be married, and I was so happy that the day had finally arrived after waiting for three years for it to come.”

A blanket of snow on the morning of the wedding failed to make any impact and soon melted away as the new married couple departed from the chapel. There were a few tears when Lisa “realised it was just me and my dad left at the door” before they made the walk down the aisle. “Everyone said as soon as I reached Danny at the alter you could literally see both of us just become so at ease that we were together again.” 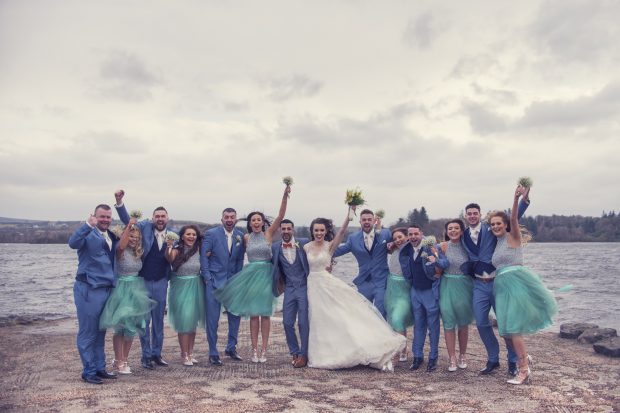 The couple danced the night away until around 2.30am bringing down the curtain on an “unforgettable day”. Lisa added, “I would happily do it all over again, and I would not change anything. I never regretted anything about our wedding day or the planning stage.”