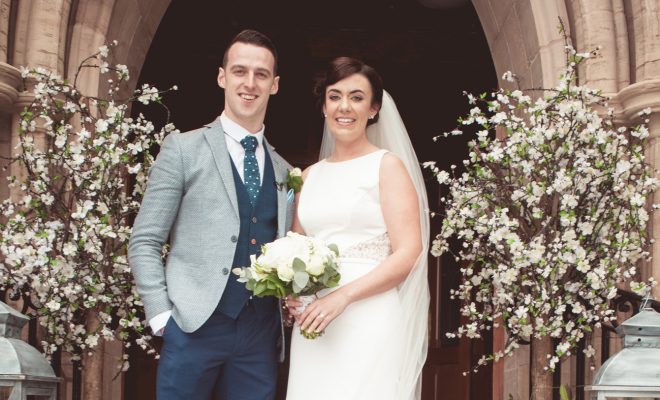 A Spring wedding day to always remember for Ciara and Niall

A romantic proposal while walking up the leafy-green mountain of Slieve Gallion transformed into a sunny Spring wedding for Ciara McSloy and Tyrone GAA star, Niall Morgan.

The pair were wed on April 18, 2017 at the Holy Trinity Church, Cookstown in a beautiful ceremony performed by Fr Gerard Tremer.

Their wedding reception took place in the An Grianan Hotel, Inishowen – a homely venue set in the rolling hills of County Donegal.

The new Mrs Morgan, who is from Cookstown, works as a maths teacher while her husband, Niall is a primary school teacher and a goalkeeper for Tyrone. 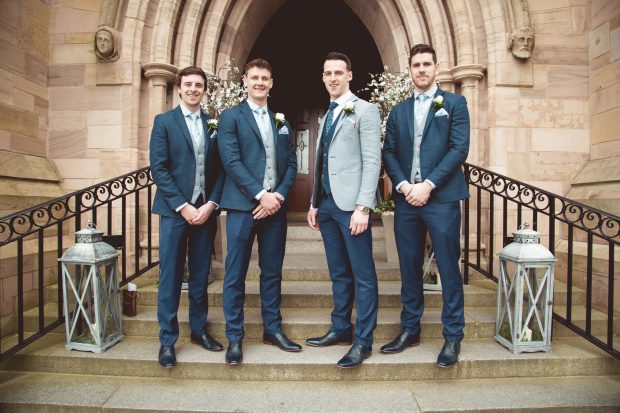 She recalls first meeting the Edendork man on a night out at the Glenavon Hotel, Cookstown in the Summer of 2009 and the pair were almost together five years before becoming engaged on May 25, 2015 in romantic fashion.

“We went for a walk up Slieve Gallion and I commented on the view,” Ciara recalled. “From behind me, Niall asked ‘What about this for a view?’ “And there he was, down on one knee with the ring in his hand.”

She added, “His proposal was completely unexpected, but I was overwhelmed with excitement when it happened. There were tears of joy.”

Niall first proposed with a token ring which featured a gold band with a diamond top. And even though Ciara was very impressed with his choice, the pair went later that day to D&K Jewellers to pick a glamorous engagement band together. 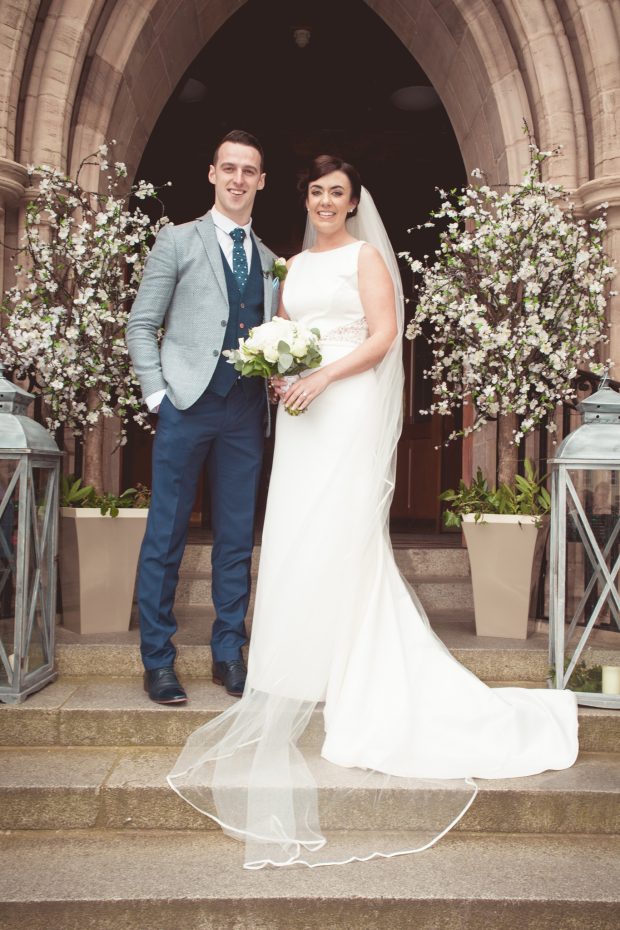 Niall, son of Martin and Pauline Morgan, wed Ciara, daughter of John and Dympna McSloy
on April 18, 2017 at the Holy Trinity Church, Cookstown.

“We chose one which had a gold band encrusted with diamonds,” Ciara explained. “It featured a cluster of diamonds on top, surrounding a larger diamond.”

After the newlyweds-to-be decided upon a wedding date, plans for their big day fell into place as time went by. “At the beginning, we had absolutely no preference to a wedding theme or colour scheme,” Ciara recalled.

“We started looking at hotels which we had no idea or preference over, but everything just took shape with each passing month.” 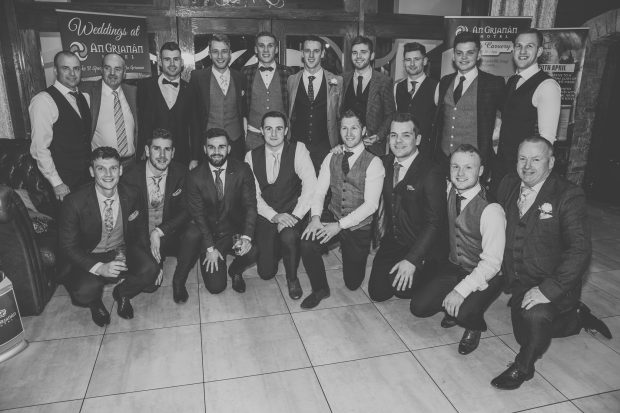 Edendork team-mates looking prim and proper as they celebrate the marriage of Cookstown
woman, Ciara and Tyrone keeper, Niall Morgan.

To ensure that she found the perfect gown for her day, Ciara went wedding dress shopping on two different occasions. The first was with her beloved mum, Dympna to ‘have a wee nosy’ at the selection and gather a few ideas together. But then on the second day of searching, with two of her bridesmaids on-hand to offer advice and moral support, Ciara found her dream dress in Perfect Day, Lurgan.

The ivory satin gown featured a back draped with lace detail, a small belt detail around the waist and a dainty bow at the front. “It came with diamanté buttons along the back, but I replaced them with pearl buttons,” Ciara said. “The dress was also fairly-fitted, but flared out into a small train detail.” 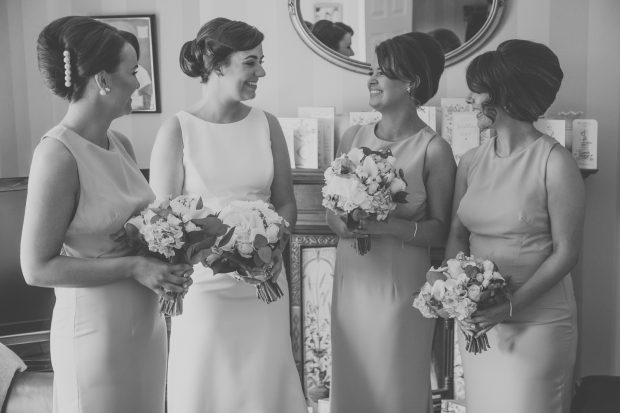 When her big day finally arrived, Ciara described feeling totally relaxed and was ‘very excited’. “Our service was beautiful but simple,” Ciara said. “It was very easy, and followed the layout of a traditional ceremony. “The day itself was bright and dry which is what every bride hopes for.”

Whisked away to their welcoming venue in a snazzy Hummer, it was soon time for the new Mr and Mrs Morgan to tuck into their three tiered wedding cake of chocolate, rocky road and vanilla sponge flavours, decorated with pearl detail and small etching. 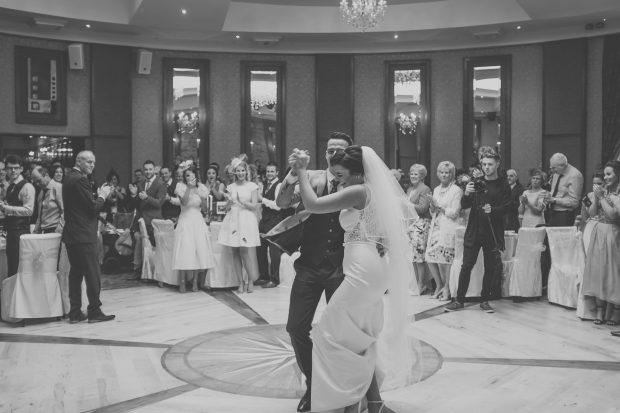 Ciara and Niall enjoy their first dance to ‘Close Your Eyes’ by Michael Bublé.

Then music by wedding band Hype and DJ Hix took centre stage, and the pair alongside approximately 240 guests kept on dancing until the early hours of the morning.

“Our wedding was everything we had hoped for and more,” the 26- year-old concluded. “Everything went well and we thoroughly enjoyed ourselves. “It was a day we will never forget, and such a great way to celebrate the beginning of our new life together.” 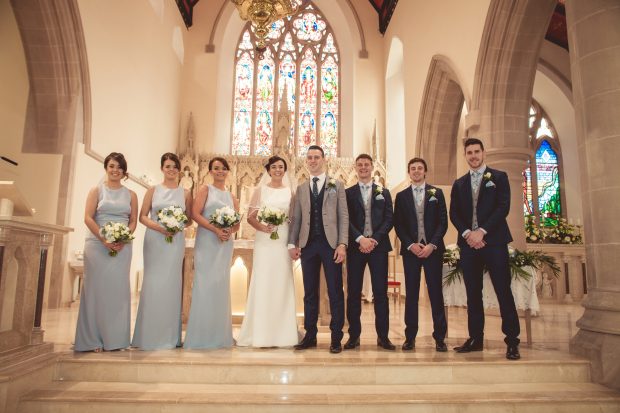