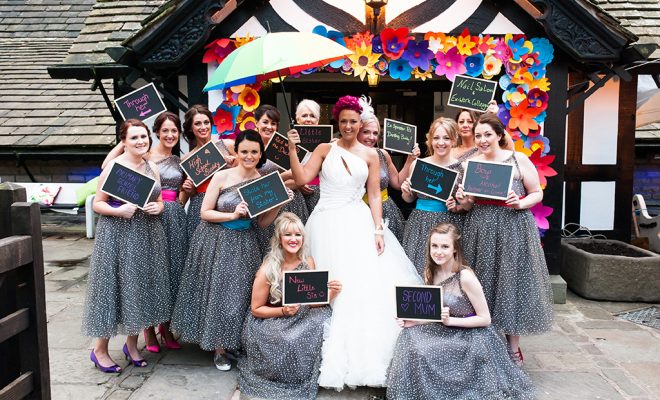 A Spring wedding of many colours for Laura and Chris

A truly romantic proposal on Christmas Day transformed into a fairytale wedding filled with music, laughter and rainbow colours for Laura Dixon and Chris Wright.

The pair were wed in a civil ceremony on April 1, 2017 and they enjoyed a large wedding reception in the magical venue of Rivington Hall Barn in Bolton. Dimly lit by daylight and fairy lights, the venue featured beautiful grounds, a marquee and a conservatory which was perfect for the newlyweds’ drinks reception and barbecue.

Laura, whose family are from Dungannon, first met Chris on a night out in a Blackpool bar – the Merrie England – in August 2015. “He was over from Manchester celebrating his birthday, and I was out with friends for a drink before leaving for holiday to Australia for a month,” Laura explained. “Chris was gorgeous – a silver fox. He has the biggest smile, kind eyes and he is a great dancer.”

Together for four months, it was on December 25, 2015 that the Stockport man proposed to Laura in a unique and novel way. In front of her children, he presented her with a special gift – a book, with all of the pages folded into the words ‘marry me’.

Her sparkling engagement ring – which was platinum with a round diamond and more diamonds on the shoulders – hung on a branch of their Christmas tree which held a decoration of Chris’ son’s name. 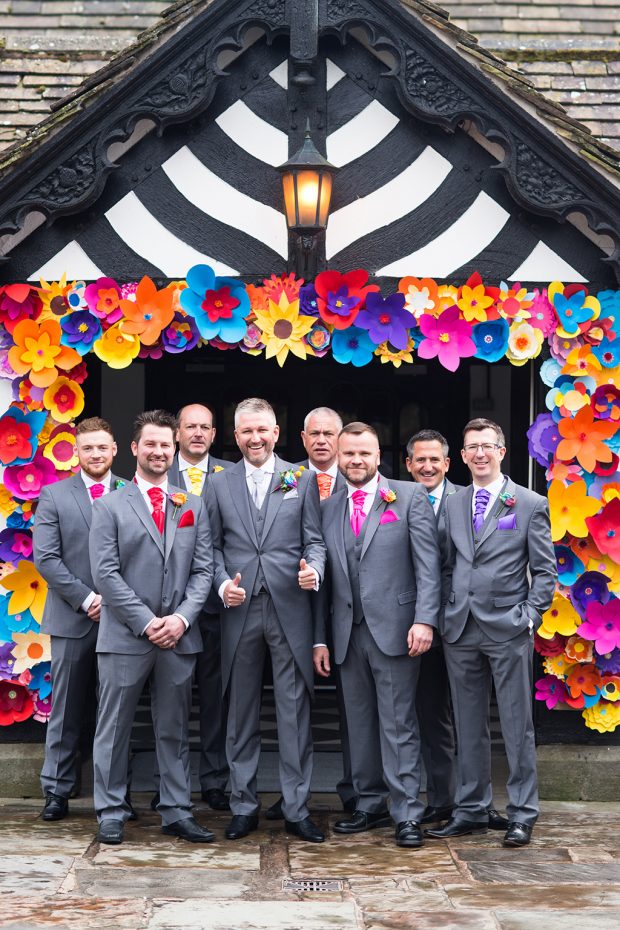 “At first I couldn’t read what the pages said,” Laura recalled. “My daughter, Isabella started screaming and saying, ‘It says ‘marry me mummy’. “I was so shocked, and I of course said yes. The rest of that Christmas Day was a blur and we couldn’t wait to share our news.” Laura added, “I love that Chris chose that ring for me and it’s perfect. And the moment was even more special because all of the children were involved in the proposal.”

With a strong vision of their day, the pair began tirelessly planning for the wedding in the dawn of 2016. “We wanted a party – everyone laughing and dancing from start-to finish,” Laura described.

“We liked the idea of something bright, rainbow-themed, original and individual to our personalities. “Every wedding I have seen recently is vintage, lace, shabby chic, blush pink or rose gold. We wanted to break from the norm and the day to be vibrant, informal and fun. “I love crafting and making my ideas a reality and so a lot of what was there was handmade by myself, and my bridesmaids.” 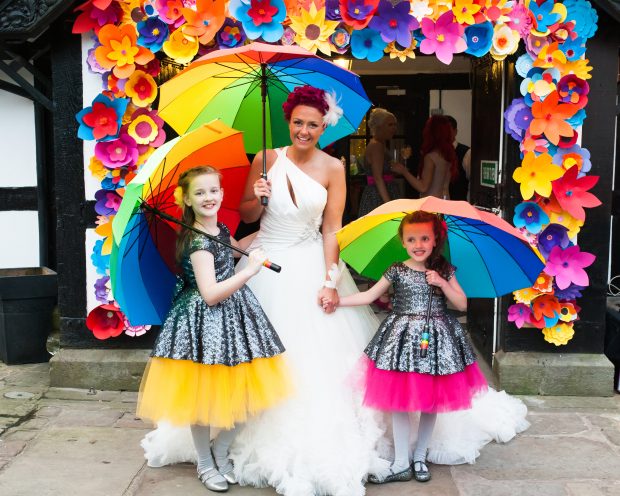 The new Mrs Wright-Dixon enjoys a colourful wedding day with her children, Isabella and Cleo.

Laura, who previously modelled wedding gowns for a career, found her dream dress from Dreamcatcher Bridal in Kirkham. The queen-style ball gown featured an asymmetric split shoulder silk bodice, crystal detailing around the waist and a full skirt of pleated tulle. “It was just what I wanted,” Laura smiled.

On the morning of her big day she sipped on champagne, spent time with the children and described feeling ‘relaxed’. “Such a lot of planning had gone into the day, organising such a large bridal party,” she said. “It was no easy task but the morning of the wedding for me was lovely. “My 12 bridesmaids were the ones who kept everything on track, ensuring that my day was stress-free and perfect.” 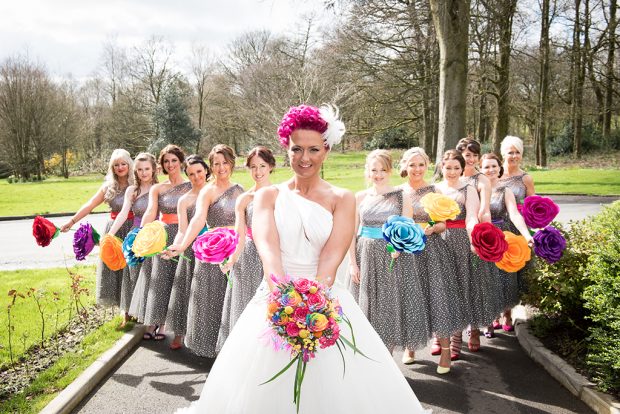 With a party-style atmosphere created for the ceremony, Laura’s bridesmaids walked down the aisle dancing to Tiffany’s ‘I Think We’re Alone Now’ – the girls’ trademark night-out song. “I think people thought I was joking when I said they were entering to that,” Laura laughed.

The beautiful bride’s daughters, Isabella and Cleo and Chris’ son, Harley led the flower girls and page boys down the aisle to a piano piece called ‘He Sleeps’ from Pretty Woman. “This is our favourite film and was the theme for the table names,” she explained.

“My daughters read a poem that they had written themselves and we hadn’t heard it before, and Chris’ son was the ring bearer. “These were very special moments.”

At the wedding reception, the newlyweds enjoyed a three tier cake, which when cut into, revealed layers of rainbow-coloured sponge. On the top were troll cake toppers to represent the bride’s pink hair and Chris’ grey hair.

The festivities were followed by music from band The Deadbeats and DJ Aldini who kept the party going ‘till the death’. “Our day was perfect,” the 35-yearold concluded. “It was everything we imagined and more, but it goes by so quickly.” 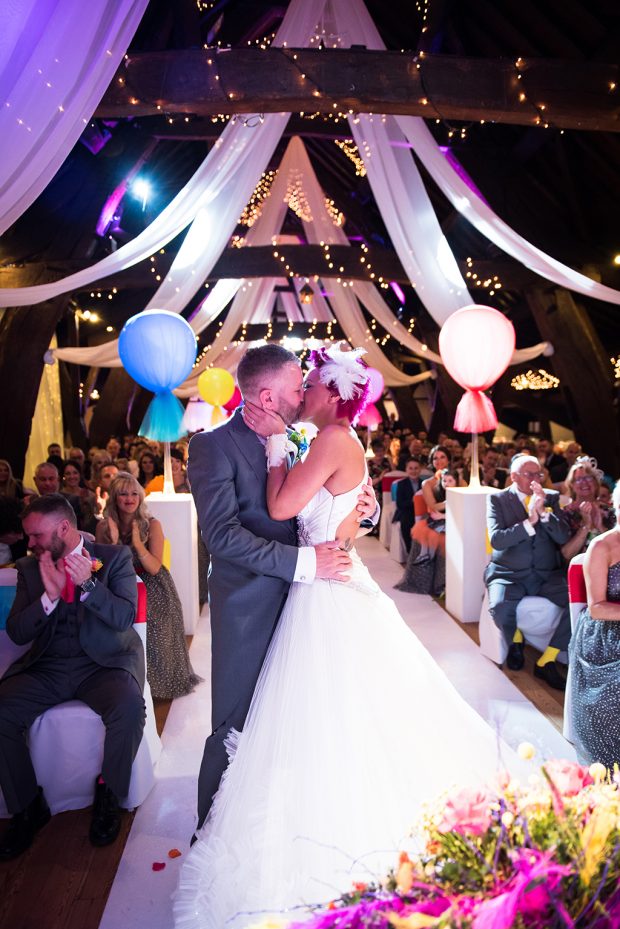 Laura Dixon, daughter of Pete and Bridie, kisses her husband, Chris Wright, son of Adrian and Marian on their Spring wedding day.