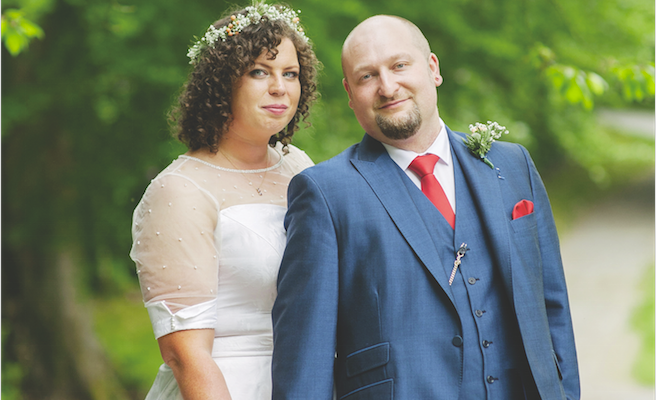 Stephanie and Mark marry on a beautiful summer’s day

The smell of honeysuckle flowers and the beautiful summer sunshine helped give Stephanie Winslow and Mark Stewart a wedding day that they will never forget.

The pair were married in Stephanie’s hometown of Clogher by Rev Noel Regan at St Macartan’s Cathedral on June 4, 2016.

Love began to flourish for the couple when they went on their first date to Omagh cinema on February 17, 2013 – and they haven’t looked back since.

Together for a whirlwind 16 months, it was on June 26, 2014, that Mark asked Stephanie for her hand in marriage by a familiar flowing river in the heart of Sion Mills, For Stephanie, who is a veterinary surgeon, this was the perfect location for a proposal as she would walk her dog, Flo, there regularly.

“Mark gave me a beautiful gold ruby and diamond ring, which he picked himself,” Stephanie explained. Deciding that they’d like a two year engagement to give themselves plenty of time to plan the day, Stephanie initially had her heart set on a traditional wedding with personal undertones.

“We decided quite early on that that I wanted seven rainbow bridesmaids as I had a lot of close friends and no sisters,” Stephanie reflected.

“We also decided honeysuckle would be the main flower as I love the colour and smell it produces. “I thought that my wedding would be quite traditional initially, which I think it was in many ways – but it had some very modern aspects as well.”

She added, “Dress shopping was not something that particularly appealed to me, but I decided to go to a few shops to try on different styles. “The dress I wore on my day was designed and made by a local dressmaker, Elizabeth Ann Design.” 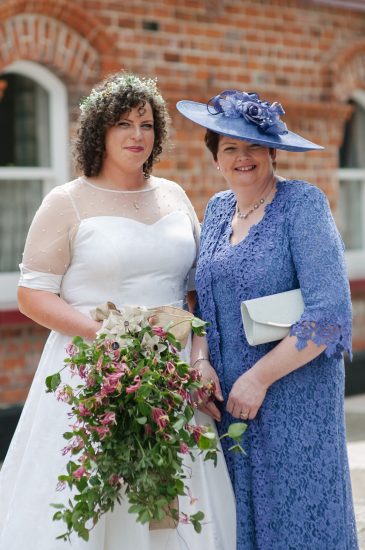 Stephanie with her mum Lynn who played a creative role in their wedding day. Stephanie’s bouquet was cut fresh from the garden on the morning of the wedding. Lynn of Lynns Cakes also made their stunning 7 tier wedding cake with intricate details of honeysuckle and butterlies.

For a thoughtful finishing touch, Stephanie’s dress was decorated with a beautiful cameo brooch, borrowed from her grandmother.

Stephanie chose Beech Hill Country House in Derry, for her wedding reception as the period building boasted grand architecture in a serene setting.

“We decided early on that we would like a marquee wedding which narrowed down our search for a venue,” Stephanie said. “And Beech Hill Country House was a beautiful listed building with lots of original features, stunning grounds and had an outstanding marquee.”

To add a touch of quirkiness to their wedding planning, the couple then sent out their wedding invitations in the form of tea towels.

Stephanie spent the morning of her big day with her mother, Lynn in her garden, meticulously cutting flowers and tying them together to make bridal bouquets.

Certainly proving that she was a calm and collected bride, the 29-year-old even added pages of her favourite book to each bouquets for an extra splash of detail.

Then it was time for Stephanie to walk up the aisle, in front of a congregation of 150 guests. “Our marriage service was a traditional church service, and we could not have wished for better weather,” Stephanie said. “June 4 was a beautiful, sunny day.

“We then made our way from their church to the hotel in a vintage Rolls Royce car and two limousines hired from Glendale limousines, Omagh.”

Waiting for them in their reception’s dining room was a magnificent seven-tier wedding cake, lovingly made and iced by Stephanie’s mother. “It was beautiful,” Stephanie said. “It had a lot of personal details, including handmade sugar honeysuckle flowers.” 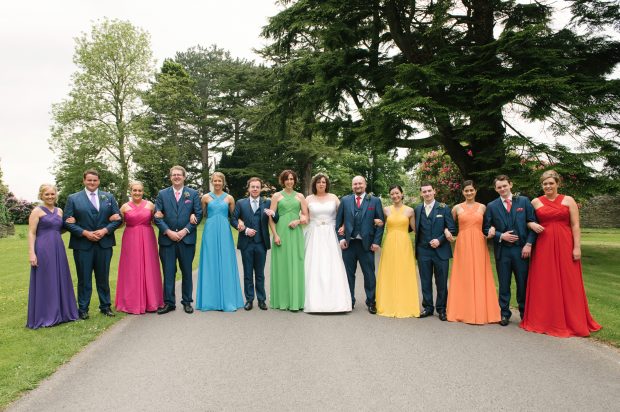 Stephanie and Mark with their bridal party using the theme of the rainbow.