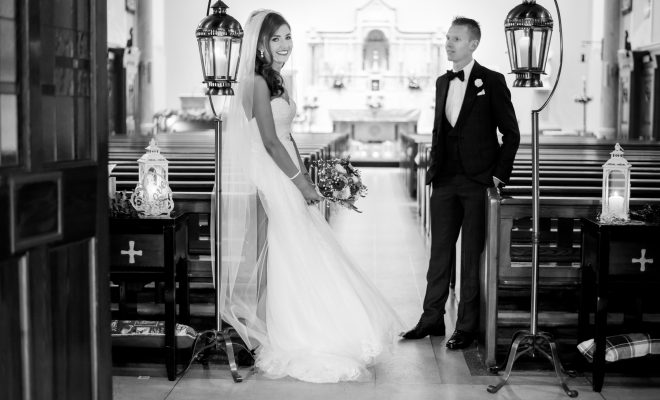 Strabane winter wedding to treasure forever for Helen and John-Gerard

When Helen Kerlin walked up the aisle to the song, ‘God’s Plan’ on her winter wedding day, she couldn’t help but smile.

The song meant the world to the Strabane woman and her husband, John-Gerard McDermott who both believe that it was God’s will that their paths crossed while they were both on holiday with separate groups of friends.

The pair were wed at the Sacred Heart Church, Strabane on December 29, 2017 in a traditional ceremony performed by Father Daniel McFaul who is the cousin of the groom.

Their wedding reception took place at the Inishowen Gateway Hotel in Buncrana – one chosen by the newlyweds as it boasted a local location which made it easy for their wedding guests to get to, and known for its excellent service and great food even when a large crowd is attending.

It was in June 2009 that Helen embarked on a girls’ holiday to the sunny Santa Ponsa where they fell in with a crowd of boys from Donegal who were staying in the same hotel – and one of those boys was John Gerard. “We had a laugh together throughout the week,” Helen, who is a civil servant, said. “When we got home, John- Gerard and I sent a few Bebo messages back-and-forth and arranged for everybody who had been on the holiday to meet in Letterkenny the following week. 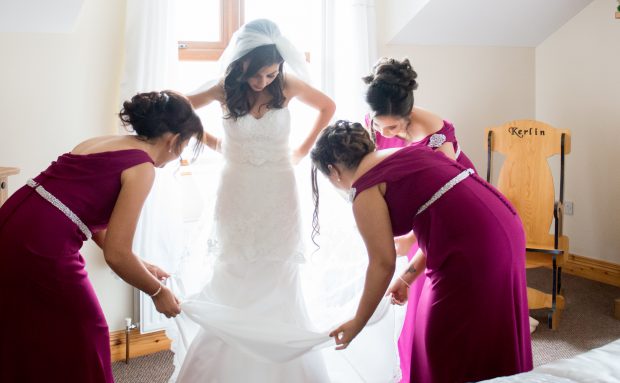 Helen McDermott (née Kerlin) preparing for her big day, with the help of her sister, Orla McNulty and nieces, Aoife and Ceire Kerlin.

“That night, John-Gerard invited me to his grandparent’s 50th wedding anniversary. I was completely against the idea as I knew nothing really about this person or his family, but the girls got me convinced to go. “So I went along to the party, where I was introduced as his girlfriend and the rest is history. That was the start of nearly nine years of driving the 84 mile round trip between our houses every weekend.”

Together for more than six years, it was on Christmas Eve night in 2015 that John-Gerard – a storeman from Glengad, Malin, Donegal – got down on one knee by the sparkling Christmas tree in Helen’s parent’s house. There he gifted her a traditional golden engagement ring, with three sparkling solitaire stones – something that he had carefully picked out himself.

“I thought he was joking at first as he loves to joke and wind me up,” Helen described. “But once I saw the ring, I realised he was being serious, and then the tears started. “He had asked my mum and dad their permission so they weren’t shocked when I bounced into their room to waken them.”

For Helen, the winter proposal was timed perfectly as she loves Christmas – and she had the church, venue and wedding date set within two weeks of the engagement. “I had waited nearly seven years, so there was no hanging about then,” she said.

“We had been to a lot of weddings during our years of dating, and we had our hearts set on a Christmas or New Years’ wedding. “We knew we wanted a traditional wedding ceremony which would be celebrated by John-Gerard’s cousin Father Daniel McFaul, followed by a great meal with a fantastic band. These are the things people remember and they were the three important things for us – ceremony, meal and band.” 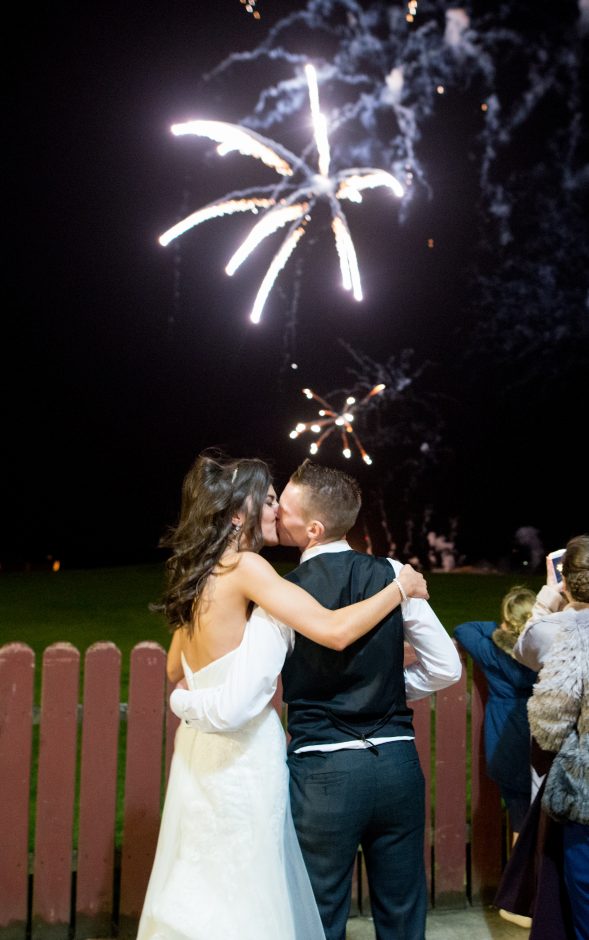 The new Mr and Mrs McDermott share a kiss as a lovely fireworks demonstration marks the end of their wedding day.

Describing wedding dress shopping as ‘very simple and exciting’, Helen looked at 10 dresses in Pearls and Lace in Donegal but picked the first one she tried on. “The dress was very deceiving as it was fitted like a mermaid shape underneath, with a French tulle overlay which then made it A-line,” Helen described. “I chose the dress as it was different to anything I had seen in magazines or at other weddings.”

On the morning of her big day, Helen said that she felt no nerves – however as the ‘baby of the household’ she became a little emotional. She arrived at the church with her mum, Sadie and her dad, John in a vintage Imperial Laudette and when she walked up the aisle, she knew that her marriage to John-Gerard was ‘everything she wanted’.

“Having driven up and down the road from Strabane to Glengad and back every weekend, all this time we were excited about finally moving in together and the next chapter in our lives,” Helen said. “I walked up the aisle to ‘God’s Plan’ which is a very special song to us, as if we hadn’t went on holidays in 2009, we may never have met, but God made our paths cross.

“Our service was simple but beautiful – every guest commented on it. We selected meaningful readings and hymns. Father McFaul spoke with such passion and made the ceremony very personal to us both and made everyone welcome. And then with Donna Taggart’s beautiful singing it was amazing. “Our wedding was a day to treasure forever as we became Mr and Mrs McDermott and that was the key point,” added Helen.

“Later on in the night, we had a few surprises for our guests with scratch cards on the tables as favours, a caricature artist between the meal and band, Irish-dancers during the buffet and fireworks before the disco. I had always wanted fireworks and this was one of my highlights of the day.

Many people kept telling us when planning the wedding that you wake up the next morning thinking about all the money you wasted, but we both can honestly say we had the best day ever and wouldn’t have changed a thing,” the 26- year-old concluded. 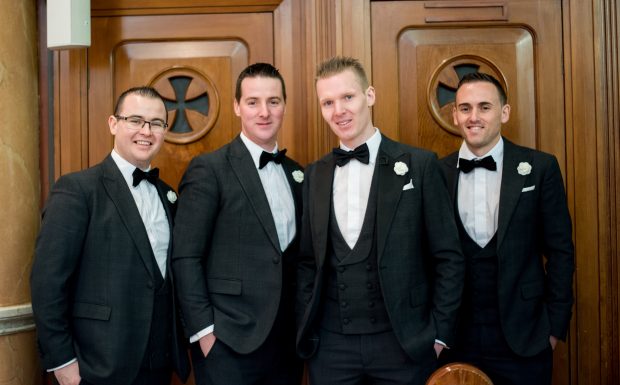