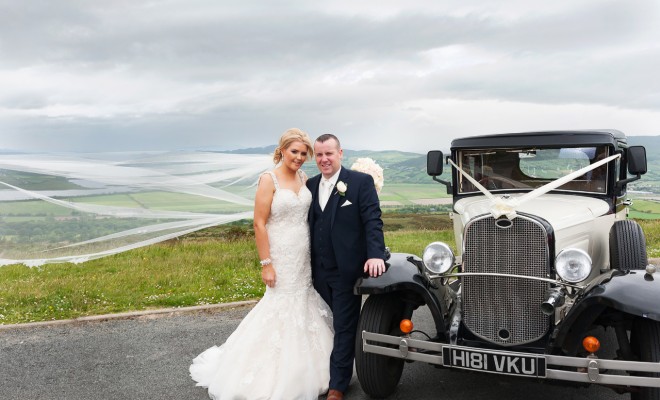 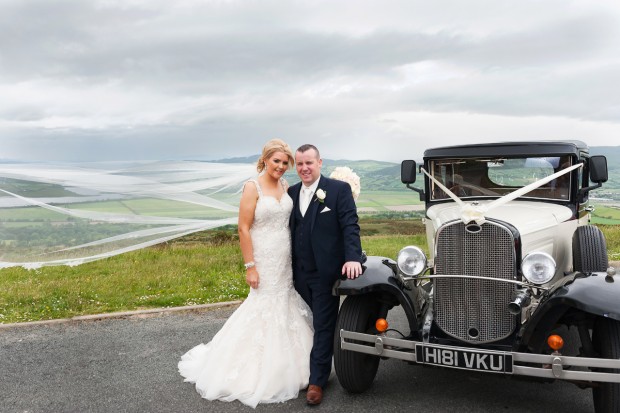 Tara Harte and Lee Pollock on their wedding day in June. Photographs by Davy Ralston photography.

When Tara Harte and Lee Pollock met each other on a “random night out in Strabane” it was simply love at first sight.

After being together for seven years, the lucky couple decided to tie the knot at St Mary’s Church, Melmount, in Strabane on June 27. As the sun shone into the chapel during the ceremony, the beautiful weather complimented their perfect day.

It was during Tara’s birthday weekend away to the Redcastle Hotel in July 2012, a treat from her boyfriend, that Lee swept her off her feet with a late night proposal.

Though Tara had already picked a ring a few months beforehand, the romantic question was something that she never expected.

And Lee, keeping true to Tara’s wishes of being traditional, had obtained her father’s permission before asking for her hand in marriage.

Despite her reactions of “surprise” and “excitement”, Tara always knew that she was going to say yes.

“I rang my mum and because I was screaming down the phone, she asked me if I’d won the lottery!” she said.

When the couple arrived back from a nine month trip to Australia – a place they had always wanted to visit before getting married – it was all systems go to start planning for the perfect day.

“I had always imagined my wedding in my head, but I never thought that it was going to happen,” Tara said.

But it was just as Tara had “given up hope” of finding her perfect wedding dress that one from a Lurgan shop simply blew her away.

“I must have tried on at least 70 wedding dresses before I found the one,” she said. “It was the last shop I tried and the first one that I put on there. It was perfect for me.”

Though Tara wanted her wedding to be traditional and “not too over the top,” Lee surprised her with tickets for a romantic winter New York trip on the morning of the big day.

Even though Tara’s bridesmaids and mum were worried that Tara would break down before she reached the altar, Tara managed to keep herself “relaxed and calm.”

“That’s the kind of person that I am anyway,” Tara explained. “But I simply wasn’t nervous – I couldn’t wait to get my dress on and see Lee again.”

However emotions began to kick in when Tara’s father saw her in her dress for the first time.

“I began to tear up as it was such a beautiful moment,” she explained.

Lee, who was also feeling the nerves when he got to the chapel, felt a rush of relief when he set his eyes on Tara at the altar. “Or so he told me!” Tara joked.

The couple were wed by Fr Michael  Doherty, a priest who had known them both since they were children.

“That really added to the special day,” Tara said.

“And the ceremony was lovely – but too quick,” she laughed.

At their reception at the An Grianan Hotel, Burt Co Donegal, the newlyweds enjoyed a night of dancing and celebration.

The Lee Roy Brown Band, who played music from the 80’s and onwards had all of their guests up on their feet, jiving the night away.

“The whole day was brilliant and I wouldn’t change a thing,” Tara concluded. “If I did it all again, it would all be the same.”

Related Items
← Previous Story Bride swaps the wellies for a wedding dress
Next Story → Marathon? I’d rather have a Snickers!