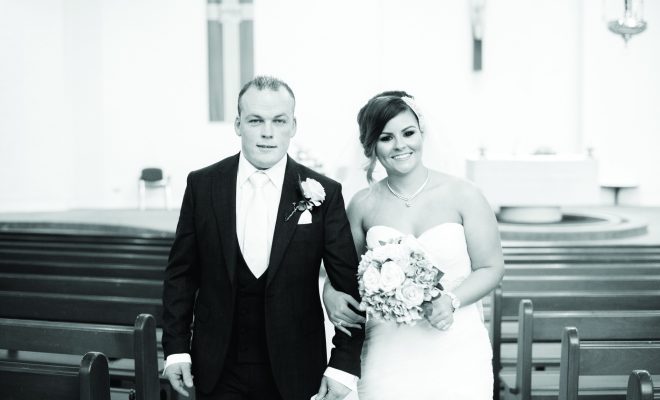 Sun shines down on Michelle and Brendan’s Autumn wedding day

They say seven is the perfect number, and that certainly seemed to be the case for Michelle McManus and Brendan McCullagh.

On the day of the couple’s seven year anniversary, Brendan presented the Clanabogan native with a sparkling diamond ring and asked for her hand in marriage.

Just under two years later, the pair were wed by Fr McEntee at St Davog’s Church in Dromore on October 22, 2016. 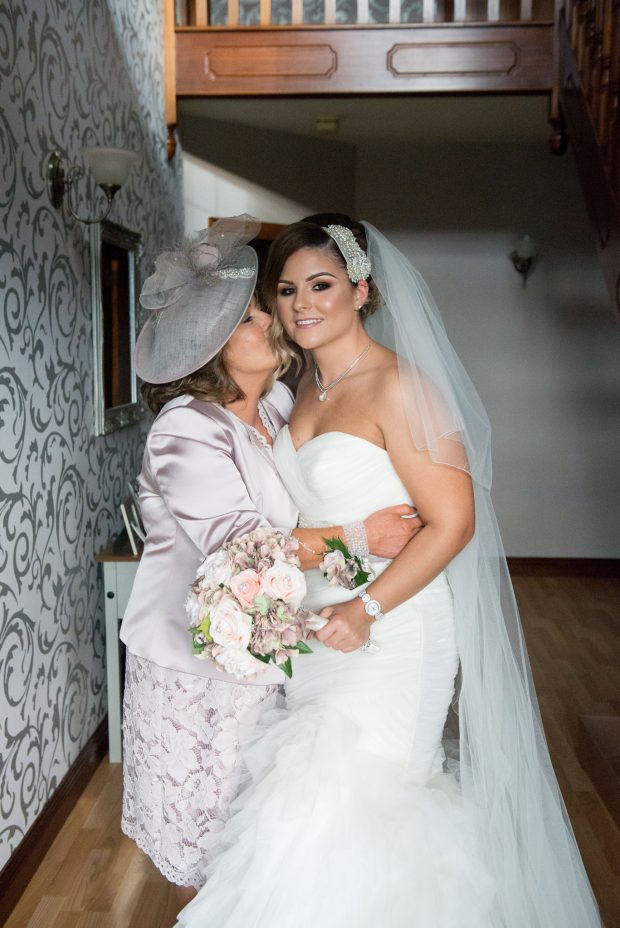 The new Mrs McCullagh and her beloved mother, Josephine McManus

On that day, the sun was beaming down and flooded the church with sunlight. Michelle, who now lives in Greencastle, first met Brendan through a mutual friend on a warm summer’s night out in Omagh on July 2007.

“We got talking, and we went on a few dates shortly after,” she explained. “Our friendship turned into much more as the weeks went by.” It was on December 7, 2014, that the Greencastle man presented Michelle with a sparkling ring, featuring a breath-taking diamond band with a cushion-cut two-tier diamond centrepiece.

Brendan’s proposal, Michelle said, was a “lovely surprise.” “I was very overwhelmed when it happened,” she reflected. “I couldn’t believe it.” 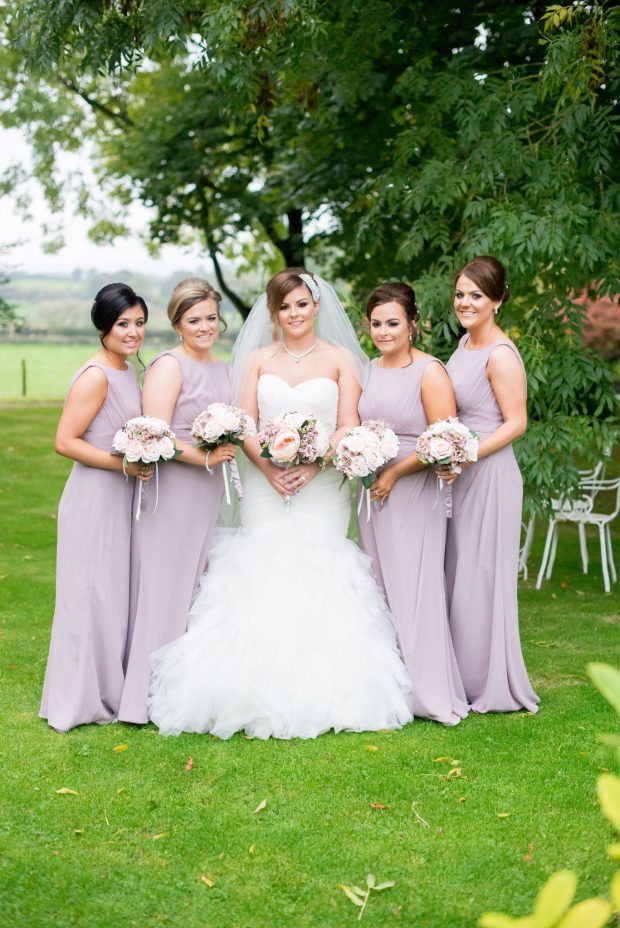 She added, “We got engaged in December which was a busy time at work for me so we decided to leave wedding planning until January. Then it was all systems go.”

Michelle had her heart set on a traditional wedding, but with girly glitz and glam thrown into the mix. “I had a few wedding ideas in mind, but you don’t really know how they are going work out until closer to the day,” she explained. “But I did know the colour of the bridesmaid dresses that I wanted and so I took it from there.”

As Michelle is a hair and beauty salon owner, it’s no surprise that she thoroughly enjoyed her wedding dress shopping experience. “It’s not everyday you get to try on lots of wedding dresses,” she smiled. 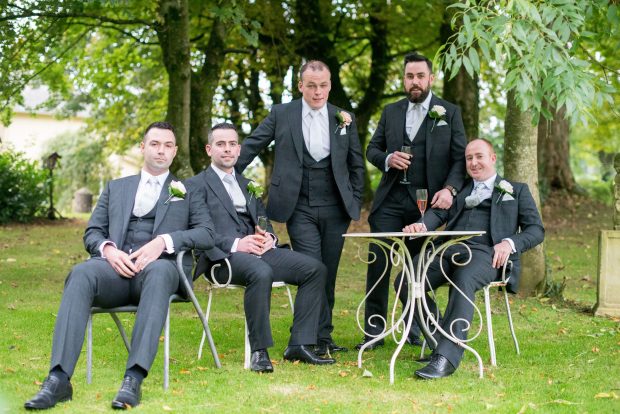 “I visited three different shops, and by the time I got to the third one, I had a fair idea of what I was looking for.” It was in Perfect Day, Lurgan, where Michelle found just the right gown for her.

With the store’s helpful staff on hand to offer their advice, the blushing bride-to-be picked out an ivory-white fitted dress with a sweetheart neckline. It also featured flowing ruffles with a beautiful train. “I just loved it,” she reflected. “I wore a cathedral length sparkly veil to match it.”

When her beautifully sunny Autumn wedding day finally arrived, Michelle admitted that she didn’t feel nervous… Until it was her turn to walk down the aisle. 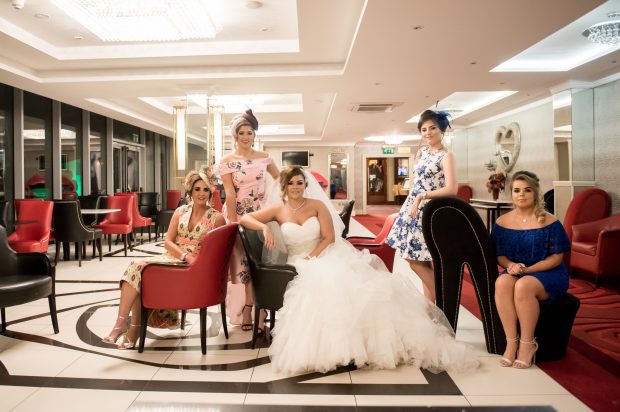 Michelle celebrates with some of her friends on her wedding day.

“I was really looking forward to the day, and the weather was perfect – the sun just shone,” Michelle said. “Our service was lovely and relaxed and the beautiful singing by Donna Taggart really made it special. She was just amazing. “Booking her to sing was one of the first things I ticked off my wedding list.”

After the service, the new Mr and Mrs McCullagh were whisked away to their reception in the Hillgrove Hotel in Monaghan, and would soon join approximately 240 of their closest family and beloved friends.

Their gorgeous wedding cake featured four tiers with a shining pearl and diamanté ball on top. “The bottom tier has a ruffled effect with a plain tier on top,” Michelle explained. “Then the next was a coloured tier to match the colour of the bridesmaids dresses, followed by a slimmer tier with ribbon on the top. We just loved it!”

It was wedding band Hype from Cookstown who set an upbeat atmosphere for the rest of the night, but not before performing ‘The One’ by Kodaline for the newlywed’s first dance.

“They were fantastic,” the 27-yearold concluded. “We danced all night with all our guests, and had the time of our lives. “The time just goes so quick, but our wedding day was better than we ever could have dreamed of.” 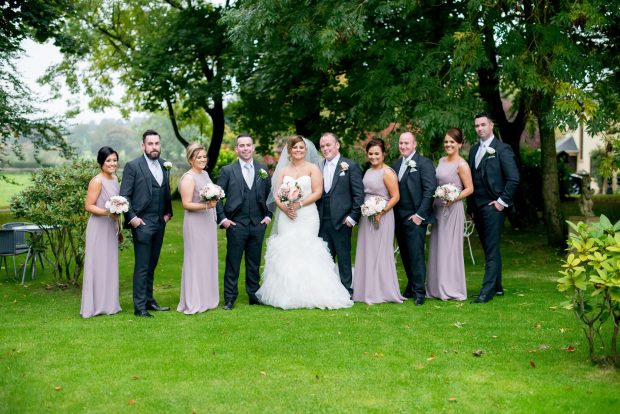