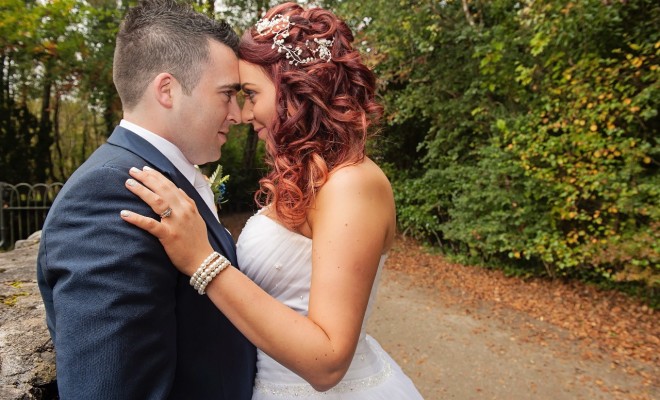 When Paulina Dlugosz first met Omagh man Daniel McGinn on a night out in Main Street she just “knew from the start” that the pair would be a perfect future match. After being in each other’s lives for four years, the devoted couple were wed by Fr McElhennon at St Mary’s Church, Killyclogher on October 10 2015.

It was back on a summer’s evening one July, just before the couple departed for a romantic meal to celebrate their first year together, that Daniel (26) surprised Paulina (31) with an unexpected proposal. With shaking hands, Daniel presented his bride-to-be with a whitegold engagement ring, decorated with a large sparkling diamond in the centre.

“He asked me to marry him, and I said ‘of course I will’,” Paulina explained. “Both me and Daniel clicked right away, and we have always been very much in love. “I was so shocked that he proposed, but I was also so happy.” 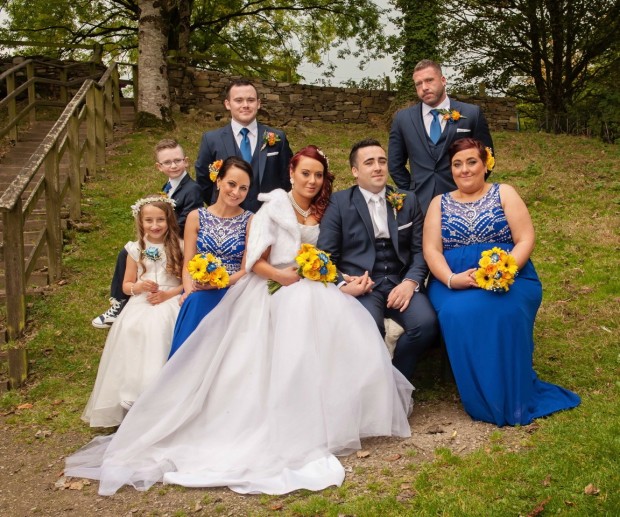 Though Paulina, who has lived in Omagh for the last 10 years, admitted that she “wasn’t really into weddings”, she was inspired by Daniel’s family to start planning for a traditional day which was scheduled for two-and-a-half years after the proposal.

Hoping to wed on an autumnal day, Paulina soon decided that she wanted her bridesmaids to be draped in royal blue and silver gowns. “I thought that those colours were so classy, and perfect for my autumn-winter wedding,” she said.

After falling in love with the countryside location of the Mellon Country Hotel and booking the venue for her reception, her next stop was shopping for wedding bands. On a short trip to H Samuel in Cookstown, Paulina picked out a white-gold band encrusted with twinkling diamonds. “I wanted one to perfectly match my engagement ring, and I found it,” she said.

Despite originally looking for a fishtailed wedding dress, it was when Paulina visited Michelle’s Bridal in Omagh that she found two fitted gowns that she was torn between. Eventually she decided that dress number two, a sparkling white gown laced with pearl beads and a long train was the right one for her.

“Both were so gorgeous, and it was very hard to choose between them,” she said. “But I set my heart on the second one and I know I made the right choice.” On the morning of Paulina’s big day, the bride-to-be described feeling “very calm” as she got her hair and make-up done by Omagh stylist Shirley Crawford. 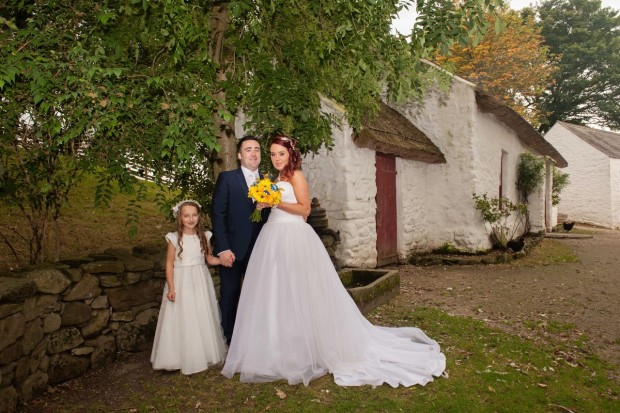 However her nerves began to kick in as she made her way up the aisle alongside her mother, Beata who had travelled all the way from Paulina’s home town in Krakow, Poland for the wedding. “My hands and legs were shaking, and it took me a little while to calm down,” she said.

With the church beautifully decorated with colourful roses, chrysanthemums and gypsophila by florist Paula Wallis, Paulina was also treated to an array of religious songs, performed by her husband to- be’s cousin Orlaith McGinn and friend Ryan McLaughlin. “The ceremony was amazing, and though it was 40 minutes long, it felt like it was over in one minute,” Paulina described.

After being whisked away in a silver limo to the Ulster American Folk Park for a sunshine-filled wedding photo-shoot, it wasn’t long before Paulina and Daniel set eyes on their multi-tiered wedding cake made of cupcakes for the very first time.

Later on, with four-piece band Jokers Wild setting an upbeat atmosphere, Paulina alongside her 140 guests partied on into the early hours of the morning. “It was a memorable day for both of us,” Paulina reflected. “It’s definitely one that I’ll never forget.”