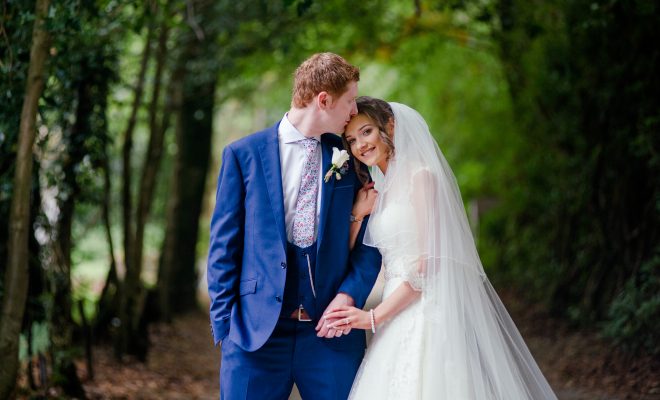 A romantic proposal near the town where they first met transformed into a beautiful, traditional wedding day for Jill Hamilton and Daryl Coote – and it rained just a little bit for luck too.

The pair were wed at Mountjoy Meeting House, Ulster American Folk Park in a service filled with smiles performed by Reverend Nick Cooper and Mark Jones on September 8, 2018. Karen Hamilton was maid of honour, Andrew Robinson was best man, Louise Beacom and Lauren Aiken were bridesmaids and Stephen Lockhart and Andrew Lockhart were groomsmen. 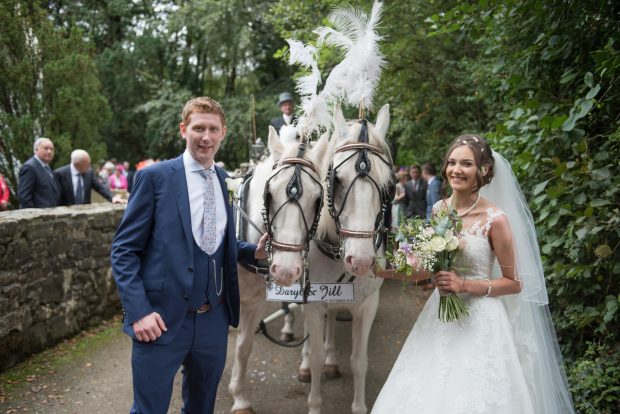 These horses took beautiful bride, Jill Coote (née Hamilton) to the Ulster American Folk Park, where she wed Daryl Coote. Here the horses are, greeting the newlyweds after their wedding ceremony.

The newlyweds’ wedding reception took place at the Lusty Beg Island, a unique and enchanting place which proved perfect for photos. Jill, a staff nurse from Fintona, first met Daryl on Easter Sunday (March 31, 2013) on Portstewart Promenade. “My sister and I stopped to speak to one of his friends that we knew, and he then introduced us to Daryl,” Jill recalled. “We spoke on-and-off after that, but we didn’t start going out until July 13, 2013. “He was very funny and outgoing, and I found him very easy to talk to straightaway.”

Together for almost four-and-a-half years, it was on November 12, 2017, during a special weekend away to Portstewart that Daryl asked Jill for her hand in marriage. “We decided to go away for the weekend before my birthday,” Jill explained. “Daryl took me back to Portstewart which we both love going to, and where we first met.” The pair then drove out towards Downhill to go for a walk around Mussenden Temple, and Daryl brought Jill over to the edge to view the scenic water seascape. It was there, with the beauty of nature as a backdrop, that the Aughnacloy man got down on one knee. 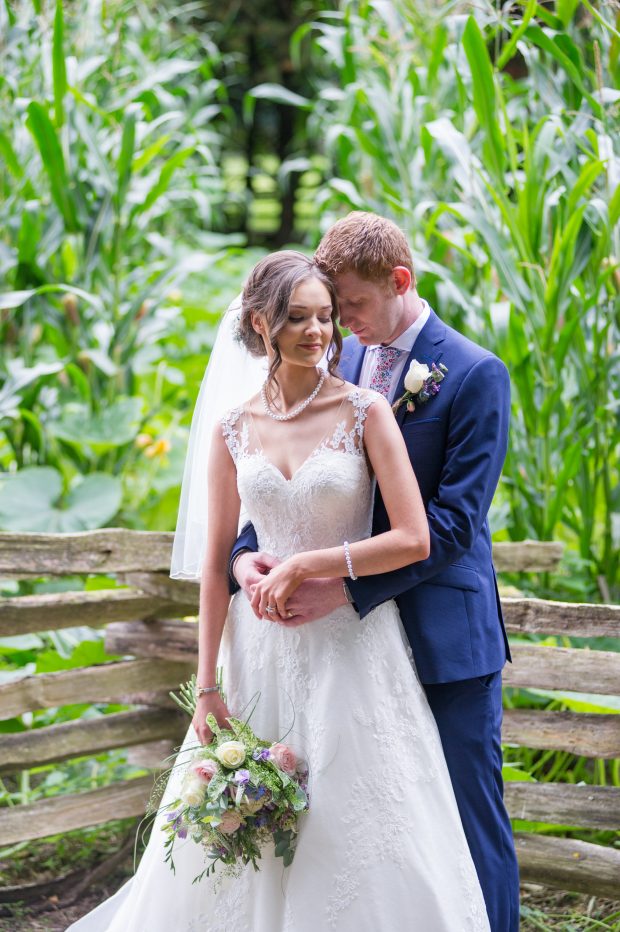 “At first I thought he was joking, but when I realised he was waiting for an answer, I shouted ‘yes!’,” Jill recalled. “I was just so happy and excited.” The pair later went shopping to find Jill the perfect engagement band, and as Jill had ‘no idea’ what she wanted, they decided to get a ring specially made for her. The unique design featured a band of gold with a trio of shimmering diamonds.

As the newlyweds-to-be both knew they didn’t want a long engagement, they began looking at venues almost straight away – and they had their hearts set on traditional elements throughout their day. “We decided to get married at the Ulster American Folk Park in Omagh as we thought it would be lovely for photos and it was just something a little bit different,” Jill described. “We also both loved Lusty Beg from the other times we had been to it, as it was a lovely setting and the staff were very accommodating.” 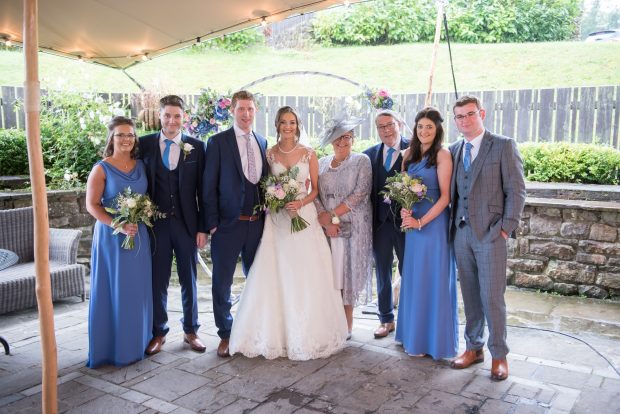 The new Mr and Mrs Coote celebrate their wedding day alongside their nearest and dearest.

Thoroughly enjoying her experience of wedding dress shopping, it was shop number two where Jill found her perfect gown. The gorgeous ivory dress, fitted down to the waist featured a flared skirt, a dainty train and vintage buttons which ran down the back. She paired the gown with a sparkling belt around her waist. “As soon as I tried on the dress, I fell for it,” Jill said. “I found bridal gown shopping a lovely experience, as you get to try on so many different styles, and I didn’t feel like it took me that long to find the one.”

Jill knew that her wedding day would be emotional, but it didn’t hit her until she was standing outside the Mountjoy Meeting House, about to walk in. She had made the journey there in a horse drawn carriage, along with her father Ken, while her mother Gillian and bridal party were whisked to the Folk Park in an old style car. “I felt a mixture of nerves and excitement before the ceremony, and when I walked up the aisle there were definitely a few tears,” Jill described. “But once I reached the top of the aisle, the tears stopped and were replaced with more excitement.

“Our service was lovely and very personal,” Jill added. “I was very nervous during the vows, but we both smiled our way through the rest. “Daryl’s old minister, Reverend Nick Cooper and my uncle Mark both took part in the service, which was very special to us. “I loved every minute of our wedding day, and loved all the excitement leading up to it,” the 24-year-old concluded. “It was very much a family day for us which we both really wanted.

“It was such a fabulous day.” Jill concluded by expressing her thanks to her family and Daryl’s family for their invaluable help in planning their wonderful autumn wedding day. 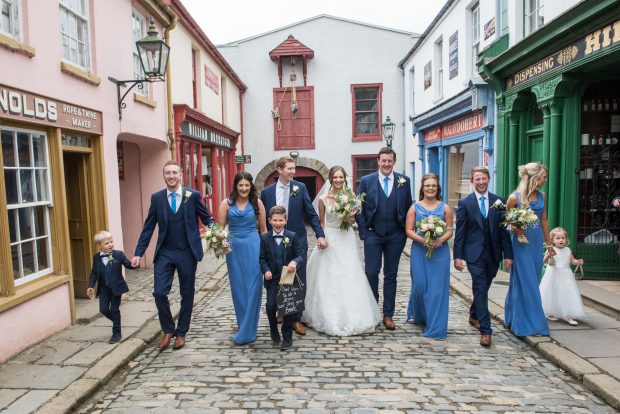 Related ItemsCeremonyengagementflowersproposalreceptionringvenuewedding
← Previous Story Thinking About a Wedding Planner? Here’s What You Need to Know
Next Story → Free Online Resources To Create Your Wedding Invitations