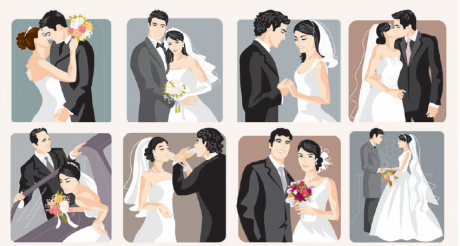 The Girls, Me, Teak Three, Independence Day and my title for the day…

As we made that long walk up the aisle as they played ‘Here Comes The Bride’, it struck me, here I am about to give her away and all the money in the world would not buy her.’
– Donegal father, Seamus McBride recalls the day he gave away his daughter in marriage.

For most people Friday, July 4, 2008 was just an ordinary Friday but for me it was a day packed full of emotion as I stepped up to the role of father of the bride.  Prior to the wedding day the weather had been dire. One day had been wetter than the previous but when the curtains were pulled back that morning it was obvious that somebody up there was looking down on us and that the statue left outside overnight had worked wonders.

Of course it was all hands on deck as soon as the alarm went off at 6.30am and for the next few hours organised panic set in and I was stuck right in the middle of it.  For the first hour or so the hub of the activity was centred in the kitchen because part of this meticulously pre-planned programme of events included a fry-up because for the previous six month I had been informed more times that I can remember that it was going to be a long and tiring day.

All this took place amid the dregs of the previous night’s memorabilia, included empty glasses, dried-up sandwiches and a few wrinkled cocktail sausages. Sights which were far from easy on the eye as it suddenly dawned on me that the tiredness was coming from less than five hours sleep.

The last few manic weeks had taken its toll but the fun, craic, music, and visitors had also ensured it was a time of great joy and happiness.

Shortly after eight o’clock I found myself alone as the girls left to go to their various appointments. The teak three (fake tan) as I call had already been applied the day before and as far as my memory serves me on the wedding day it was hair, nails, eyebrows, but in what order I’ll be dammed if I could tell you.

Those couple of hours on my own conjured up so many memories and what I had been told about it going to be an emotional day was quickly becoming a reality as was the title that I would hold for the following 16 or so hours ‘Father of the Bride’.   I decided to take a nap on the sofa and a combination of dozing and dreaming opened a gate that had so many things locked behind it for years.Freud said dreams are the royal road to the unconscious mind and I could very much relate to that.

Memories that were in the conscious together with so many that were part of the royal road in my daughter’s life all came pouring back. From being there when she first entered this world to her first steps, her pink all-in-one bed suit, her first steps, first day at school and then to university and that year in Germany that I thought would never end as she continued her studies had me on one hell of a roller-coaster.

Yes it was emotional and if I were to say that a tear did not dampen my cheek I would not be telling the truth. It was as if I was flicking through the pages of a book, a book of her life to date and I wondered just where those years had gone. Suddenly I was laughing out loud as I thought of where they girls had gone, hairdressers, nail bar, and beauty salon.

Having worked in the advertising business for more years than I care to remember terms such as electrolysis, microdermabrasion and that one that always gives me a giggle, half leg wax (as I wonder about the other half) and all that jazz have become very much part of my vocabulary.

Suddenly I laughed as I thought how my granny would have reacted if my late ma had told her she was going to have any of the above procedures done in the run-up to her wedding. The priest or the clergyman would have been called and the rosary beads would have been out in force. I thought how things have changed in what seemed to have been only a few years but again time was playing tricks with my mind.

The sound of a car pulling into the driveway was my cue to get up and be busy having done nothing from the time they left. There was a spring in their steps and a glee in their eyes, yes this was happiness personified. I must say the teak three that had been applied the previous day had done what it said on the tin and this combined with the hairdos, make-up etc had the three most important people in my life, the bride-to-be, her sister the bridesmaid, and of course the mother of the bride, the better half looking a million dollars.

(By the way the teak three comes from the days when I had to give my exterior mahogany windows and doors a makeover and the lashings of fake tan always reminds me of that).

Nothing direct was said but from the few hints dropped I knew it was time to get the three s’s into gear, shave, shower and suit – give me half an hour and I would be ready, and I was.

I will always remember that moment when my daughter, the bride, came out of her room and stood at the top of the stairs because the lump in my throat nearly choked me. The book had turned another page and the realisation that she was about to write a new chapter was staring me right in the face.

From there to the chapel was just a blink and although the driver made small talk I was miles away. I thought of my late mother and father and my father-in-law who all had been such a big part of my daughter’s life from day one and how proud they would have been today. As we made that long walk up the aisle, it struck me, here I am about to give her away and all the money in the world would not buy her.

The baby that brought so much happiness into our lives a quarter of a century ago had become a beautiful woman who I was so proud of. The ceremony also conjured up more emotions as she took another’s name all in the name of love. The wheel had turned full circle, the circle of life that will continue to rotate until the end of time.

When the tinkle of the glass rang out as the best man called on the father of the bride to say a few words it was a rush of blood, sweat and nearly tears. So It’s not a woman’s world after all – there are a few things which were left to the men. I had no pieces of paper and nothing pre-prepared. What came out whether back-to-front or otherwise was said because that’s who I am – and it came from the heart.

But at the end of the day my daughter was happy, we were happy and she had just taken the name of a man who I knew would also make her happy. Now it was time for music, song, dance and a few bevies and the adventure that had started out nearly 16 hours ago was about to enter another day. But I clung to my title of father of the bride for another few hours as we celebrated and enjoyed every minute.

The girls, me, teak three and Independence Day may not ring too many bells for most people but for me it was simply a day I will remember for as long as I live.