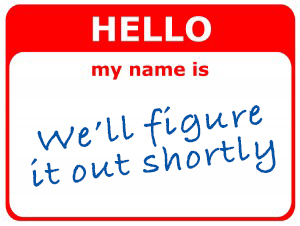 So, it may be time to address the holy elephant in the room, yes I do have a rather unusual surname. Despite popular opinion, I’m not from anywhere remotely near Italy. In fact, the name ‘Pope’ hails originally from England and in the most recent past from Scotland. If you imagine that growing up with a name like ‘Pope’ made me a target for an endless stream of childish taunts and jibes about being holy and having a direct phone line to God, you’d be absolutely correct. Even as an adult, I’m met with many the confused stare upon sharing my family name. Once, a woman actually asked me if I was “sure” Pope was my name. I resisted the urge to warn her about my direct phone line to him upstairs.
Under the circumstances, you’d be forgiven for thinking I would have married the first man who looked twice at me at age sixteen if only to get a more common name. Now that I think of it, if anyone does see a Paddy Doherty around Omagh please tell him the Pope says there’s no need for that restraining order – he’ll know what it means. The truth is as I’ve gotten a bit older and only marginally wiser, I have grown to love my name. Yes it’s different but who wants to be ordinary? Me the odd time actually but that’s a whole other matter. Yes, I have to repeat it several times over the telephone but it’s a way of making new friends in Indian call centres. Say it loud, say it proud; “My Name is Vanessa Pope and by God I’m proud of myself!” Now excuse me while I go play the ‘Rocky’ theme song and run up and down the stairs.
Such is life that as soon as I had come to this wonderful realisation, along came a boy to stuff the whole thing up. Oh yes, Mr. Brady’s little question of “will you marry me?” posed a very difficult dilemma. Not the marriage part obviously (else this would have been a very awkward blog) but whether or not I wanted to remain a ‘Pope’ or settle merrily into the ‘Brady Bunch’ – I’m told the dungarees are optional. Phew!
Now I’m far from a bra burning feminist. Those things are expensive and besides we have turf down our way. But I’m not a Stepford wife with petticoats and pearls either. I don’t even know how to bake bread. I fall somewhere in the helpful middle – I like a bit of tradition here and there but I also like a bit of girl power here there and everywhere too. A possible solution is the whole double-barreled thing. Ugh. Not for me. Besides being an ungodly mouthful, in our case the conjunction of his name to mine would make me Vanessa Pope Brady which would just open up a whole other cave of questions from the delightfully curious public. I’m told the kids will have to get his name. What exactly, I ask, do goats have to do with the whole thing?
So, for kicks and giggles, I asked him if he would take my name. Well, that opened up a whole can of domestic bliss that ended in a very firm and resounding ‘no, thank you’. After I threatened to go looking for Paddy in Omagh again and listened to the ‘Rocky’ theme music a while, the wedding was thankfully back on.
So, I’m back to square one on the name thing. “What’s in a name? That which we call a rose by any other name would smell as sweet” said your man Shakespeare but sure what did he ever know about getting rosary beads thrown at him in school? Very little I bet. Part of me believes that a new name will bring with it a new start, a fresh perspective on myself, my relationship and my life. I also hear that if we ever do have goats, it is easier to get them and us through airport security if we all have the same name. Brady is a great name but then so is Pope and why should I have to make this massive change just because of my gender?!
While I’m looking for bras to burn (Penney’s ones obviously) Mr. Brady tells me it’s entirely my decision and if I want to change my name to Vanessa Eatsalot, it’ll matter not a jot to him. Ah damn it so Brady is back in the mix. I’ve decided that the name change thing is a thing for future Vanessa to decide. I trust her to know the right thing to do. I just wish I knew her second name. For the mean time, I remain a proud Vanessa Pope and I say to you all God bless!

Related Items
← Previous Story Always the Bride, Never the Bridesmaid!
Next Story → One Hundred and One Invitations