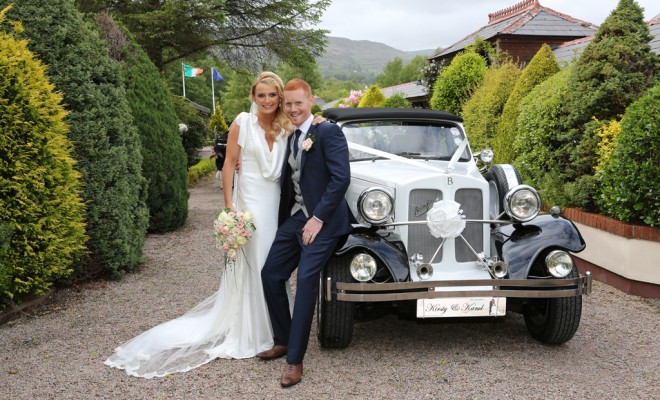 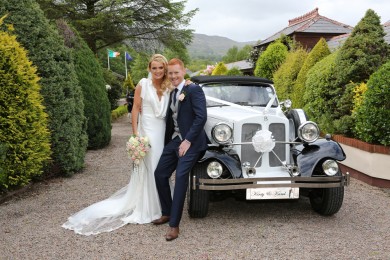 Kirsty Gormley and Karol Dolan on their wedding day. (Photographs by McLaren Photography.)

It really was a case of seeing double at the wedding of  Karol Dolan, from Aghyaran and Kirsty Gormley, from Aughabrack who married on June 6 at St Mary’s Church, Aughabrack. With both the bride and groom having an identical twin this was one wedding which almost caused double trouble for the priest!

Kirsty laughs as she recalled, “When the rights of marriage were being read out the priest said Kirsty and Caolan, rather than Karol so that got a few laughs.”

The couple “hit it off” after a night out in Cookstown in October 2010 when Karol offered Kirsty a lift home.

The pair had known each other in passing beforehand as Karol worked as a joiner for Kirsty’s father.

But that night in Cookstown cemented a new bond and after a three-year romance Karol popped the question during a weekend break in Liverpool.

Nothing was stressful for this relaxed couple but when the UH picked up their story the couple found they were being recognised on the street before and after their big day.

Kirsty said, “We had stayed for a few nights in the Galgorm after the wedding and there was a couple of people who had came up and said they recognised us from the paper.

“It was really lovely seeing it all in both the UH and then in the Irish News – it was a nice build up to the wedding.”
Karol and Kirsty were adamant before the wedding that it would be a day not only for and about them but also about their ‘other halves’.

Speaking before the wedding the bride-to-be said, “On the day it’s usually all about the bride and groom, but to us our twins are equally as important. There is just a special bond between us. We have done everything together – we know we’ve always had each other.”

And true to form Kirsty and her sister Stacey were both in white – keeping to a tradition of being dressed similarly.

“Still being twins we wanted to be alike –  it was funny because beforehand people said that you’d notice me because I would be wearing white so I think there was a bit of shock when we both walked down the aisle in white.”

At the reception Kirsty’s identical twin Stacey had set up a slideshow of the two sets of twins down through the years.

“There were all the fashions down through the years and experiences I would rather forget,” laughed Kirsty.

The couple had no nervous just building excitement on the big day.

“It was just exciting getting into our dresses, being in the wedding cars and seeing everything come together. Karol thought he would have been nervous on the day but he wasn’t. Everyone was in good form the whole day,” Kirsty explained.

For the couple it was just lovely to see their plans come together. And family played a major part of the day from Karol’s cousin Andy Dolan making the wedding cake to Kirsty and Karol making their own centrepieces and crates for the flower arrangements at the church.

Now getting used to having a new ‘other half’ the couple are looking forward to their skiing honeymoon in Austria during the winter.