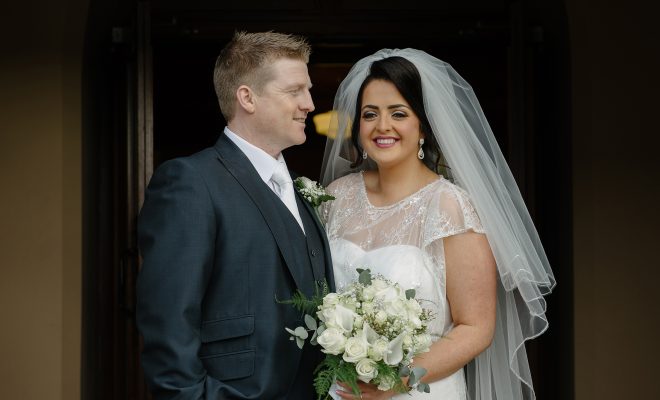 An intimate wedding ceremony laced with laughter, loved ones and music filled with emotion gave Una Hurson and Paul Kirwan the best day of their lives.

The dedicated couple were wed on February 18, 2017 at Church of St John the Baptist, Galbally – the bride’s hometown – in a service performed by Fr Gerard McAleer.

Ironically, the pair first met at a wedding all the way back in the Summer of 2009. “Paul’s brother Eric married one of my best friends,” Una, who works as a midwife, explained.

“Soon after the wedding, Paul came up to see me – and the rest is history. “He has always been caring, kind, easy-going and good,” she added. “He keeps me calm and is my best friend. He is also a great daddy to his son, Ben.”

Together for six years, it was during a romantic weekend away in Galway – an early Christmas present from Paul – that the Tipperary man got down on one knee.

Taking his love to a special restaurant in the heart of the coastal city on December 18, 2015, Una was in for the surprise of her life when she received her dessert which featured a very special message written beautifully in chocolate. “The words ‘Will you marry me?’ were written on my dessert plate,” Una reflected.

“The staff were all watching, and were prompt with the champagne when I said yes! “After the initial shock and a little bit of embarrassment as the restaurant was full, I shed a wee tear.” She added, “We were both over the moon and celebrated in Galway for the weekend before going home to Paul’s family in Tipperary, and then Galbally to continue the celebrations with the Hurson gang on Hilltop – that’s what we call my home house.” 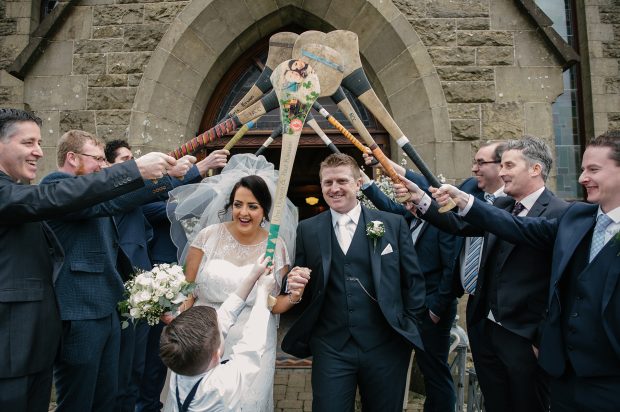 Una and Paul leave the church through a guard of honour formed by hurlers.

Her glittering engagement ring featured a diamond-encrusted platinum band with an eye-catching princess cut diamond in the centre. “I loved it,” she smiled. “We had went looking at rings a few weeks before we got engaged, and after trying a few on I hinted as to which style I liked. The rest was up to him.” She added, “We enjoyed the engagement celebrations and Christmas, and then began wedding planning in the new year.”

With her heart set on a traditional wedding intertwined with elegance, the pair quickly fell in love with the beautiful ballroom and fabulous chandeliers of the Cavan Crystal Hotel, Cavan and booked it for their wedding reception.

“From our first meeting, we knew it was the venue for us,” Una reflected. “The staff were fantastic and went above and beyond their duty to make everything perfect.”

Even though Una visited around seven wedding dress stores, she kept going back to one particular gown which she fell for on the first day of shopping.

Featuring very delicate lace with glints of sparkle and a small train, Una said she simply knew it was the one. “It was very light and comfortable,” she said. “I bought it from a fairly new boutique called Loughview Brides just outside Stewartstown – and I’m so glad I did. “My mother Shelia and sisters were all there and they loved it too.” 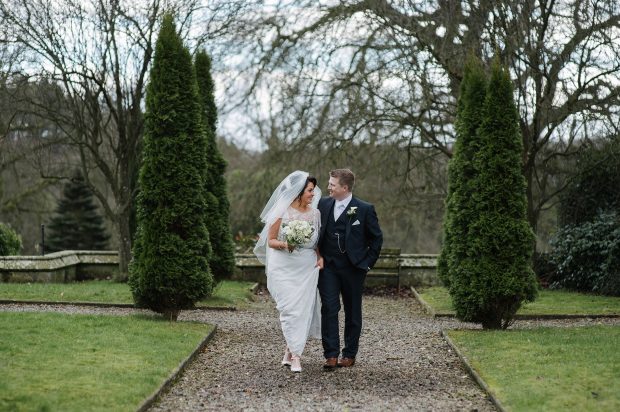 Paul Kirwan and Una Hurson on their wedding day.

When Una’s big day finally arrived, she was so excited that she didn’t sleep much the night before. And while she felt a little nervous arriving at the church, her fears soon dissipated when she walked up the aisle to beautiful music by Philomena Begley.

“I was impressed I didn’t shed a tear as I thought I would have been very emotional,” Una recalled. “The Mass was beautiful, intimate and a very happy occasion with lots of laughter, smiles and great music. “Family members and close friends took part in the ceremony which was very special to us and Fr McAleer spoke some very kind words.” She added, “My mother had taken unwell the week before the wedding so it was great she could join us and be a special part of our big day.”

Whisked away to their wedding reception via a beautiful vintage car driven by her cousin, Aidan McElvogue (Exotic Limos), the new Mr and Mrs Kirwan were soon tucking into their white four-tier sparkling cake.

Then they danced the night away to wedding band, The Miracles – which Una’s brother, Kevin is a member of – and enjoyed a surprise guest appearance from vocalist Philomena Begley. “Everything went really well – it was a wonderful day,” the 34-year-old concluded.

“We were both so happy and enjoyed every minute as did our guests. “It was the best day of our lives, and I wish we could do it all again as it all went so quick.” The newlyweds honeymooned in Las Vegas and Mexico, and are now settling into married life in Tipperary. 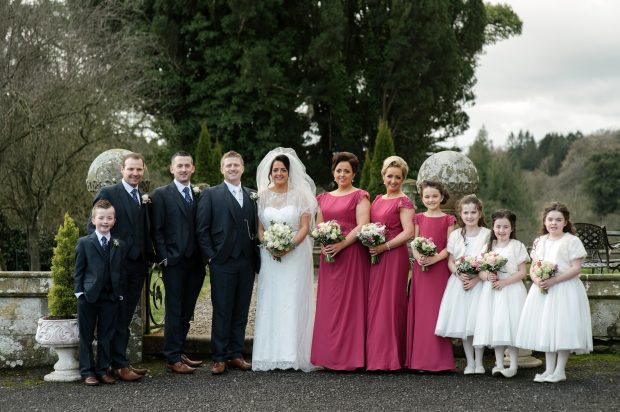