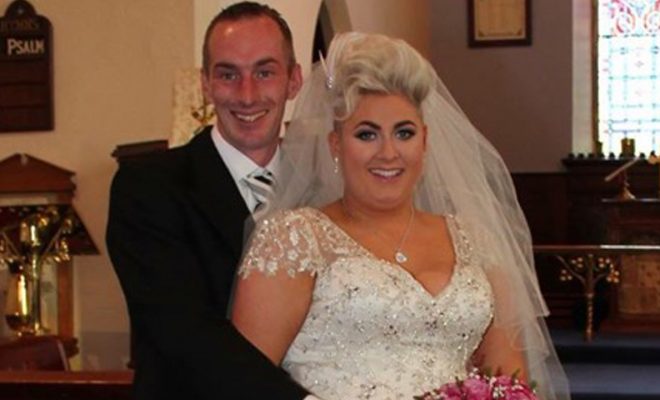 A beautiful vintage Autumn wedding which fell on the four-year anniversary of the date they first met gave Vicki Maguire and Jason Rea an incredible day of many happy memories.

The pair were wed in Edenderry Church of Ireland in an emotional ceremony performed by Canon Robert Clarke on November 14, 2016. Their wedding reception took place in the newly-renovated Silverbirch Hotel in Omagh – a place which the newlyweds chose due to its chic decor and lighting, friendly staff and easy to-get-to location.

It was during a chilly night out in Main Street when the pair first met, and their relationship blossomed after adding each other on Facebook. However, what they didn’t realise until they started dating was that they had both attended the same high school, and Vicki had even worked with Jason’s sisters in her previous job.

The new Mr and Mrs Rea with their pageboy, Alex Rea, and flower girl, Katie Graham.

“Jason makes me laugh,” Vicki, who is a support worker from the Hospital Road, Omagh, described. “He always sees the good in situations which I stress over. “We are complete opposites that attracted one another. He’s the easy-going one in our house, whereas I worry and panic.”

Jason, who is a farmer from Clanabogan, surprised Vicki with an unexpected proposal during a shopping trip to Belfast on April 18, 2015.

“We were walking past a jewellers, and Jason says, ‘Go in here’,” Vicki recalled. “I thought he meant the phone shop beside it, as his phone broke during the week. “In we went, and a lady approached us to ask if we needed any assistance. And Jason replied, ‘Can we see engagement rings?’ “The women got so excited and asked when we got engaged, to which I was in complete shock and said that we weren’t!” 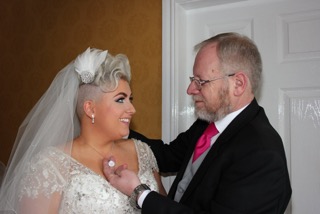 It was there, amidst Vicki’s confusion in the middle of the store, that Jason asked for her hand in marriage. “I was in complete shock – I had no idea that it was coming,” Vicki said. “Jason is a farmer and he doesn’t do emotion. Unlike me, I was ringing home like a blubbering mess!”

The ring Vicki picked was white gold with diamonds dotted across each side of the band, and sparkling high set diamonds in the middle. “However I had to wait to get in my size,” Vicki said. “Later we went out for dinner and I was telling everyone. But each person wanted to see the ring, and I was gutted that I couldn’t show them.”

After setting a date to wed in the heart of Autumn, wedding planning simply fell into place for the bride-to-be. “I knew straight away I wanted a vintage-themed wedding and one which had very traditional elements – such as my father walking me up the aisle, a church wedding, singing, vows,” Vicki said. “Plus I was scared to tell Jason’s granny anything else! She’s a very traditional lady.”

With her trusty mum, Linda by her side, Vicki then set off to look for wedding dresses. She only tried on four gowns before she found the one in McElhinneys, Ballybofey. The ivory ball gown flaunted a tight bodice, ornate detailing and lots of girlie bling and diamonds. “As soon as I put it on, I loved it,” Vicki reflected. “I brought my mum along with me as I thought it was a lovely experience for her and I to have together.” 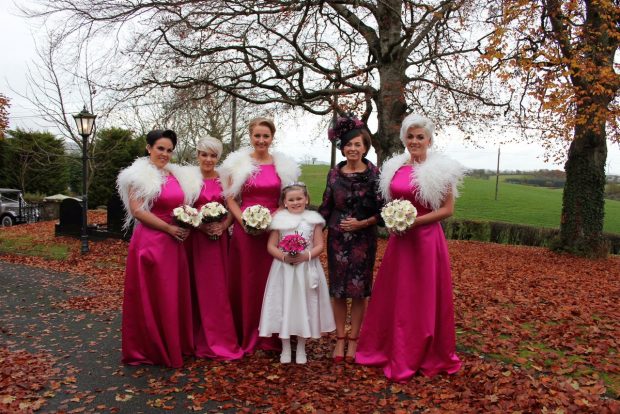 All the ladies pose for pictures outside Edenderry Parish Church among beautiful fallen amber-coloured leaves.

On the morning of her wedding, Vicki recalled having a giggle at a ‘box of treats’ which was given to her by Jason’s mum, Joan. “There was hair spray, plasters… and anti-diarrhoea tablets, which I actually laughed at,” Vicki said. “I thought I’d be emotional on the day, but I wasn’t too bad as Jason and I have two kids and already lived together. “However that last journey with my father as a Maguire will stay with me forever.”

For Vicki, Edenderry Parish Church, located in the countryside amid fields of green, set the tone for her vintage-themed wedding perfectly. “Canon Clarke was so light in his mood and so welcoming to everyone,” Vicki described. 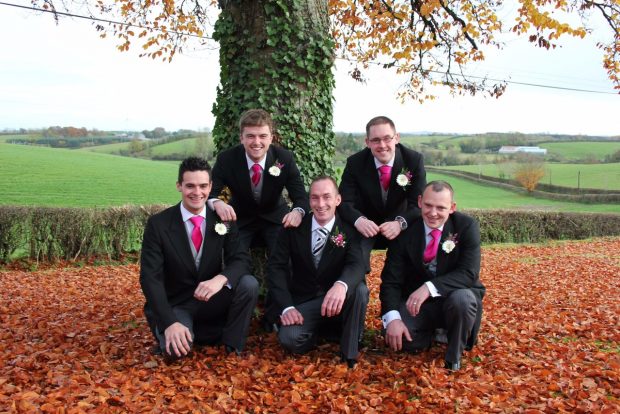 “I enjoyed the service; it was so meaningful. “As I walked up the aisle with my dad, Jim, my wedding singer performed a song called, ‘You Can Let Go Now, Daddy’. “It was very emotional, but the words were so true.” “I don’t think there was a dry eye in the house, and everyone came up to me after and said how lovely the music was.”

She added, “I also liked having my sister, Wendy sign as my witness. “Having all the people you love as part of your wedding day is very special.” The 27-year-old concluded, “I loved every part of our day and there is nothing I would change at all. I just wish I could do it all over again.”