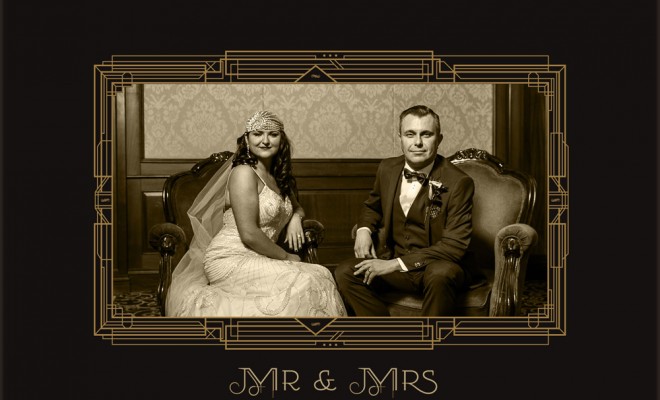 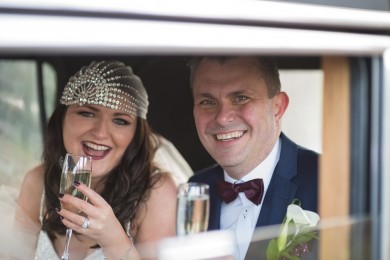 Ríofach Cannon and Ryan McNulty took a step back in time to showcase some of the glitz and glamour of the 1920s at their wedding.

From the moment the couple got engaged on February 24, 2014, Ríofach and Ryan knew exactly what they wanted for their big day.

Ríofach, from Sion Mills, said, “I just love the 1920s. I wanted it to be a bit different; I would normally be quite quirky and so I opted to have a flapper style dress.”

The bride’s dress with drop waist, head scull veil and diamantes was matched by the bridal party as the groom, best man and groomsmen all wore dickey bows.

The couple got married on February 21 in Donneyloop Chapel, Castlefinn and after spending two years together.

Strabane man Ryan proposed a year beforehand but had an important job to do before popping the question to Ríofach.

“He asked my father first if he could marry me!”

Planning came easy to the Sion Mills woman who admitted she was “very easy going,” even the night before, when the bride and groom made their table plan within an hour.

“My mum was going to kill me as only three days before the wedding my topper for the cake came. It was a handmade birdcage and I had ordered it on the Monday from a woman in England – it would usually take a few weeks but it arrived on the Wednesday.

“I always get there in the end. There’s no point in panicking!”

And after a relaxing morning getting ready, Ríofach was ready for the walk down the aisle.

“It was amazing seeing all the people I had been friends with there for me on my day. When I was walking down the aisle I saw one of my closest friends, Mandy, blubbering away and I filled up.

“I thought I was going to start crying as well, but it was just lovely having everyone there for us.”

After making it up the aisle, Father Michael Doherty kept the atmosphere relaxed.

“He was cracking jokes and had everyone laughing,” said Ríofach,

Afterwards the couple “really started celebrating” at their reception in the Mount Errigal Hotel, Letterkenny. The reception held a special place for the family as both Ríofach’s mother and father and her sister had their wedding reception there.

When it came to the speeches there was only one person they wanted to hear from.

Ríofach laughed, “Everyone started to chant my name for me to get up and make a speech. I am usually a bit of an eejit so I wanted to behave. I wasn’t expecting to get up and say a few words so I stood up with the microphone and my mouth wide open. I just didn’t know what to say!”

Someone else who was lost for words was head flower girl and daughter Eabha-Grace.

A huge Doctor Who fan, Eabha-Grace celebrated her ninth birthday week before the wedding and she was presented with Doctor Who cake at the reception, while the theme tune to the popular sci-fi show played in the background.

Ríofach said, “It was brilliant day, we both loved every second of it. I would do anything to relive it all over again.”