You’ve just been dropped alone on a glacier – in the freezing wilderness of Alaska, with nothing but a giant life-ring, a tuxedo and a plane ticket to get you home – what do you do? 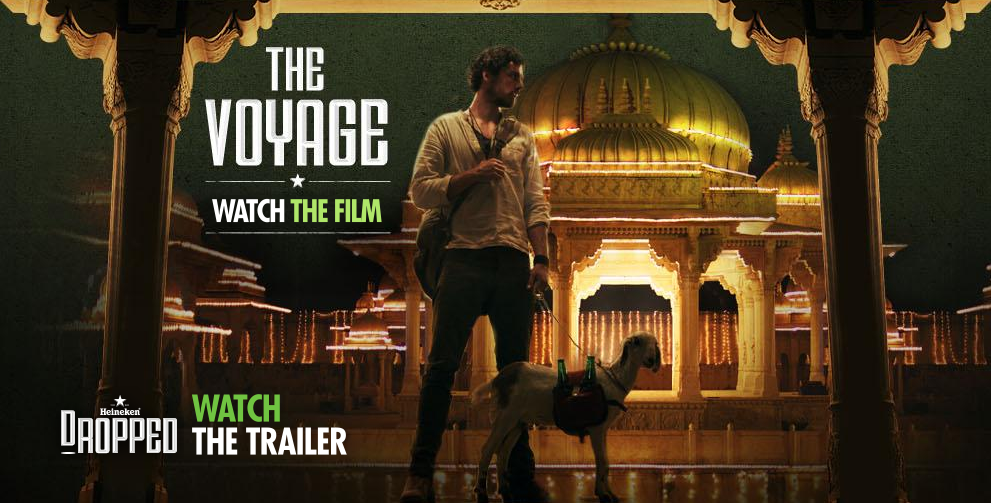 That’s the question Heineken have asked for its daring ‘Voyage’ campaign, testing what men are truly made of when taken out of their daily lives and dropped into the great unknown.

The campaign takes different men from across the world and drops them in remote global locations with nothing but the most basic of supplies and directions. The result is ‘Dropped’ – a series of episodic adventures following our intrepid explorers on their legendary travel experience.

‘Voyage’ is the fifth instalment of the Heineken ‘Legends’ platform, appearing across broadcast, digital and mobile. On the Heineken Dropped YouTube channel, viewers will be able to follow each voyage, access documentary-style content and also contribute their own video entries to the ‘casting couch’ – with the ultimate chance of partaking in their own legendary travel adventure.

Every ‘Dropped’ travel adventure will be tailored towards the character of its main protagonist – forcing them to discover their own limits and conquer their fears. Across four continents they’ll face a multitude of challenges – tough terrain, curious locals and unusual modes of transport. As the Dropped episodes unfold, so the social experiment will come to life, with viewers of each voyage able to follow how each traveller fares through a series of diary entries and journey updates.

Their final destination? Home. Will they make it? The answer lies within each adventurer – the outcome of each Dropped encounter is completely unscripted, with the participants desire to overcome the challenges the only measurement for success. For all we know legends aren’t made, they’re Dropped.

The first Dropped Voyage launched on Monday 3 June, with subsequent Dropped Voyages commencing every three weeks. Each Dropped experience will encompass three episodes, complemented with behind the scenes content on Heineken.com and YouTube.

“With Voyage, the fifth instalment of our Legends campaign, we want to go further than inspiring men to be resourceful and open to the world,” said Sandrine Huijgen, Global Communications Director with Heineken.

“We are giving a few of them the opportunity to go beyond the borders of their comfort zone. Dropped is a social experiment that will challenge the participant to display their true character and if they do, have a legendary travel experience.”

Finally, consumers who buy special packs of Heineken will be able to redeem a code and play an online game that tests their own navigation skills as they embark on a digital voyage. A lucky few will win their own legendary travel experience, with prizes on offer to include adrenaline filled travel adventures and perhaps the ultimate adventurer’s discipline – space-training.

Dropped episodes 1, 2 and 3 can be viewed here from Monday 3 June:

Related Items
Next Story → The Magic of McElhinney’s Bridal Rooms