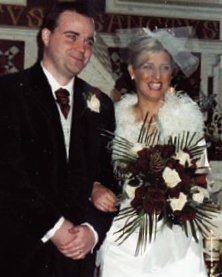 A FAIRYTALE winter wedding had been the wish of Dympna Feeney from Omagh who married Brendan in St Mary’s Church Drumragh shortly after Christmas a decade ago. Family and friends were able to relax as a clear crisp day dawned.

And a seasonal red and green theme was adopted at both the ceremony and reception afterwards in Stranorlar. “It was the holiday period, so we wanted people to be able to enjoy themselves and relax,” said Dympna.

“This was our special day and my wedding dress was designed by a woman from Monaghan. It was in ivory with a cape of ostrich feathers and we also had a general 1930s/1940s theme for the bridesmaids.”

After the excitement of the ceremony and reception, which included a performance from a magician, the happy couple travelled on a New Year cruise on the Mediterranean. It marked the start of their journey together.

Now, 10 years on, they are living in Omagh, Co Tyrone and have fond memories of their very own ‘fairytale wedding’. 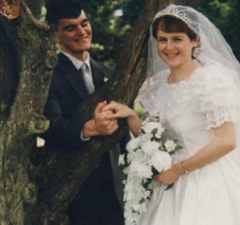 WEDDING dresses inspired by Lady Di were all the rage back in 1987 when Carol and Damien Heuston tied the knot at St Michael’s Church in Enniskillen. And Carol’s dream dress was a classic 1980s style, complete with ruffles and lace.

But that wasn’t the only big difference from today’s wedding for the couple who celebrated their silver anniversary in 2012. “Our wedding day was everything that we could have asked for. But it was probably fairly simple compared to weddings now and there was no such thing as getting your nails done or a fake tan,” recalls Carol.

“I got my dress and the bridesmaids dresses from Jean Millar in Belfast. The whole occasion cost just £2,500 and we had 80 people at the reception in the Fort Lodge Hotel. That would have been considered a fairly big wedding back then. “The only setback was the honeymoon because the place in the Costa Brava that we travelled to just wasn’t good.

“I was only 20 and my husband was just 19 when we got married, so the two of us were very young compared to the present time. We set out fully intending that our marriage would last forever and thankfully we’re still together.”

IT was often an early start for couples tying the knot back in the 1960s and Ben and Maureen were at the chapel at 11am. In a unique twist the football loving couple chose a chapel close to Croke Park for their happy day half a century ago.

The reception took place afterwards in the Maples Hotel nearby, but their plans to head away to Benidorm on honeymoon were changed at the last minute. “We had been planning to travel abroad, before we heard on the news that a plane had crashed and instead we decided to go on a tour of Ireland,” said Benny, who runs the Cross Bar in Killygordan.

“Both of us were big GAA fans, my wife supported Kerry and I was a follower of the great Down team at that time. A lot of the places that we visited on the honeymoon were centred around our shared love of gaelic football. “I remember us going to see Mick O’Dwyer who at that time had a garage in Dublin.

We also went to visit a famous Kerry footballer called Paddy Bawn Brosnan and then it was up to the Ulster Final between Cavan and Down.” Maureen’s dress came from a shop in Dublin’s George’s Street, the same one where her mother had purchased hers in the 1930s.

The ceremony was officiated by her brother, Fr Joe Bradley, and now in 2012 the couple are still following gaelic football and in particular the fortunes of the Donegal team.

Related Items
Next Story → The Girls, Me, Teak Three, Independence Day and my title for the day…